Accessibility links
JetBlue Flight Attendant Hailed By Many For Dramatic Exit : The Two-Way Is the flight attendant who cursed out a passenger, grabbed a beer and headed down the emergency slide a hero or a heel?

JetBlue Flight Attendant Hailed By Many For Dramatic Exit

JetBlue Flight Attendant Hailed By Many For Dramatic Exit

Best "take this job and shove it" moment ever? 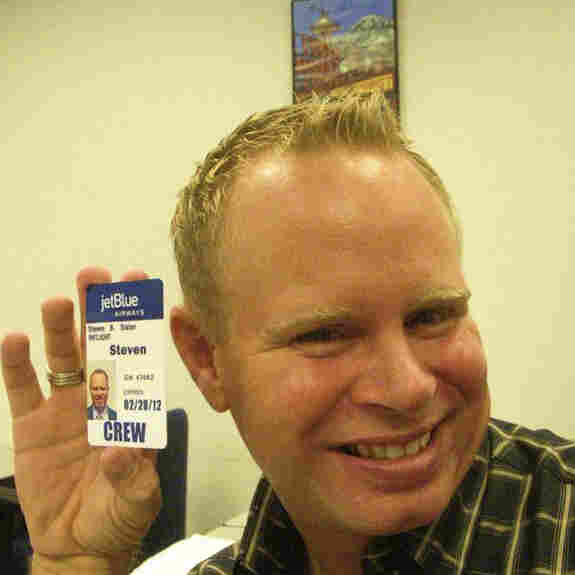 Or an out-of-proportion response that needs to be punished?

Those seem to be the two extremes when it comes to summing up how folks feel about the story of JetBlue flight attendant Steven Slater.

If you've somehow missed hearing about what happened at Kennedy Airport in New York yesterday, here's how the AP sums it up:

"A flight attendant looked pleased and relieved after cursing out a passenger on an airplane public-address system, grabbing some beer from the galley and using an emergency slide to hop off, another passenger said Tuesday. Steven Slater lost his temper after a passenger accidentally hit him on the head with luggage on the ground at Kennedy Airport on Monday, police said. After the plane parked, he made his triumphant getaway, authorities said.

On NBC's Today Show this morning, passenger Phil Catelinet said the profanity-laced announcement on the public address system caught passengers by surprise. Catelinet saw Slater shortly after the incident, and says the flight attendant "was smiling ... he was happy that he'd done this." And, Catelinet said, Slater was happy to be done with his job at JetBlue -- apparently knowing that this would likely be the end of his employment with the airline:

Slater's story has, not surprisingly, inspired fans on Facebook, and the inevitable "Free Steven Slater" t-shirts.

And there are many tweets like this (fair warning: there's a common abbreviation for a profanity).