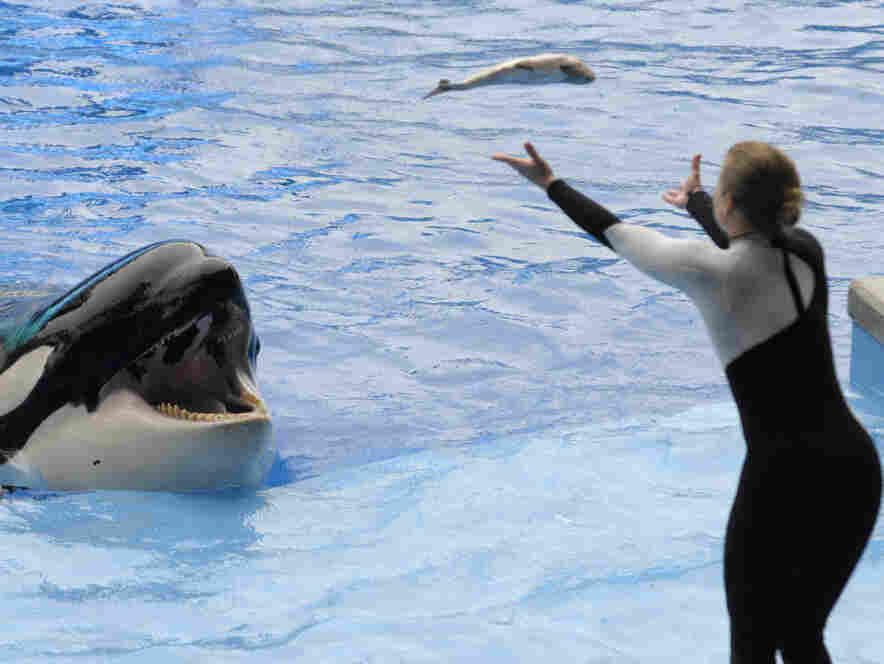 A SeaWorld trainer tosses a fish to a killer whale during the first show after a trainer was killed by an orca at the theme park three days earlier in Orlando, Fla., Saturday, Feb. 27, 2010.  PHELAN EBENHACK/POOL FR121174 AP hide caption

The Occupational Safety and Health Administration fined SeaWorld of Florida $75,000 for the deadly February attack by an orca which left one of the theme park's trainers dead.

OSHA said the death of trainer Dawn Brancheau by Tilikun, a killer whale, could have been prevented if SeaWorld had not exposed its employees to potentially dangerous marine mammals and Tilikun in particular.

Tilikun, the oldest adult male orca in captivity, was known to have had a troubled history, being involved in at least two other human fatalities.

An excerpt from OSHA's news release:

"SeaWorld recognized the inherent risk of allowing trainers to interact with potentially dangerous animals," said Cindy Coe, OSHA's regional administrator in Atlanta, Ga. "Nonetheless, it required its employees to work within the pool walls, on ledges and on shelves where they were subject to dangerous behavior by the animals."

On Feb. 24, a six-ton killer whale grabbed a trainer and pulled her under the water during what SeaWorld describes as a "relationship session," which was also observed by park guests. Video footage shows the killer whale repeatedly striking and thrashing the trainer, and pulling her under water even as she attempted to escape. The autopsy report describes the cause of death as drowning and traumatic injuries.

OSHA's investigation revealed that this animal was one of three killer whales involved in the death of an animal trainer in 1991 at Sea Land of the Pacific in Vancouver, British Columbia, Canada. SeaWorld had forbidden trainers from swimming with this whale because of his dangerous past behavior, but allowed trainers to interact with the whale, including touching him, while the trainers were lying on the pool edge in shallow water.

In addition to the history with this whale, the OSHA investigation revealed that SeaWorld trainers had an extensive history of unexpected and potentially dangerous incidents involving killer whales at its various facilities, including its location in Orlando. Despite this record, management failed to make meaningful changes to improve the safety of the work environment for its employees.

On its blog, SeaWorld said it would contest OSHA's conclusion. An excerpt:

The tragic accident on February 24, 2010 inspired an internal review of our whale program that has been unprecedented in scope. The findings of that review have been presented to an independent committee made up of some of the world’s most respected marine mammal experts. Their conclusions, drawn from decades of experience caring for marine mammals, are in stark contrast to OSHA’s. The safety of SeaWorld’s killer whale program was already a model for marine zoological facilities around the world and the changes we are now undertaking in personal safety, facility design and communication will make the display of killer whales at SeaWorld parks safer still.

OSHA's allegations in this citation are unsupported by any evidence or precedent and reflect a fundamental lack of understanding of the safety requirements associated with marine mammal care. Killer whales at SeaWorld are displayed under valid federal permits and under the supervision of two government agencies with directly applicable expertise: The U.S. Department of Agriculture Animal and Plant Health Inspection Service and the U.S. Department of Commerce National Marine Fisheries Service. SeaWorld is a member in good standing of the Association of Zoos and Aquariums and the Alliance of Marine Mammal Parks and Aquariums. Both associations make employee safety a central feature of rigorous accreditation processes.

It also is important to note that while maintaining a safe environment for our trainers, the demands of humane care require our zoological team to work in close physical proximity to these animals. Our trainers are among the most skilled, trained and committed zoological professionals in the world today. The fact that there have been so few incidents over more than 2 million separate interactions with killer whales is evidence not just of SeaWorld’s commitment to safety, but to the success of that training and the skill and professionalism of our staff.

SeaWorld's position might be that it did nothing wrong, that it was making an already safe operation even safer (a tough argument given the trainer's death) and that, as former Defense Secretary Dick Rumsfeld once famously said, "stuff happens."

But besides OSHA, there were others who found plenty to criticize. PETA blasted SeaWorld for continuing to use Tilikun as a breeding stud.

From a statement e-mailed from PETA:

In the wake of the news that the U.S. Occupational Safety and Health Administration (OSHA) has refused to cave in to pressure from SeaWorld and has found the marine park culpable in the matter of Dawn Brancheau’s killing, imposing the maximum possible fine, PETA is calling on SeaWorld to release Tilikum instead of using him as a breeding machine (the whale’s sperm, rather than his performances, is now more valuable to the marine park). Letting Tilly and the others go into ocean-bound rehabilitation would be the only way to show that the park cares less about money than about the well-being of ocean-going life and its staff.

The OSHA finding shows that SeaWorld pushed for an agreement to allow trainers back in the pools “only” if they were “protected” by such things as an oxygen supply, something that, with a broken jaw and separated scalp and arm, Dawn Brancheau would have been incapable of using.

PETA is also renewing its call on Florida Governor Charlie Crist to appoint a special prosecutor to investigate SeaWorld's actions and hopes that he will stop allowing the amount of money SeaWorld brings to the state to dissuade him from seeking justice.

ROSE: In my opinion, I am an orca biologist.... I think that the reason it happened is because this is an extremely unusual situation for a male orca to be in. He's more or less socially isolated and has been for many, many years. He's used as a breeding bull which is not a natural situation for these animals to find themselves in. It's not a natural social grouping at all. And he must be very frustrated, if nothing else, not to mention bored and lonely.

And the bonds he has with his trainer are the most important he has. And something went wrong that day. I'm not saying he meant to kill her. In fact, I'm very sure he didn't mean to kill her. But he was acting out on something that was going on in his own head. And she died.

And the fact that nothing has changed for him since then, except that he's become more isolated to keep the trainers safe, to me that's really the wrong way to handle this situation. He's not at fault but he is paying for it.

GUEST HOST SUSAN PAGE: What do you think should happen with him?

ROSE: I have recommended to Sea World that he be retired to a sea pen with another whale that would give him more stimulation, more options, more challenges and just a lot more space than he currently has. He would still be under human care, he would not be released to the wild. He would be retired.

And I think that would help his mental health as well as his physical health. And it has been utterly rejected by sea world. They're not even considering it.