Accessibility links
Busy, Boring, Confusing: PowerPoint Presents Problems For U.S. Military : The Two-Way A reporter for Danger Room says that an Army colonel was fired after he criticized its reliance on PowerPoint presentations. 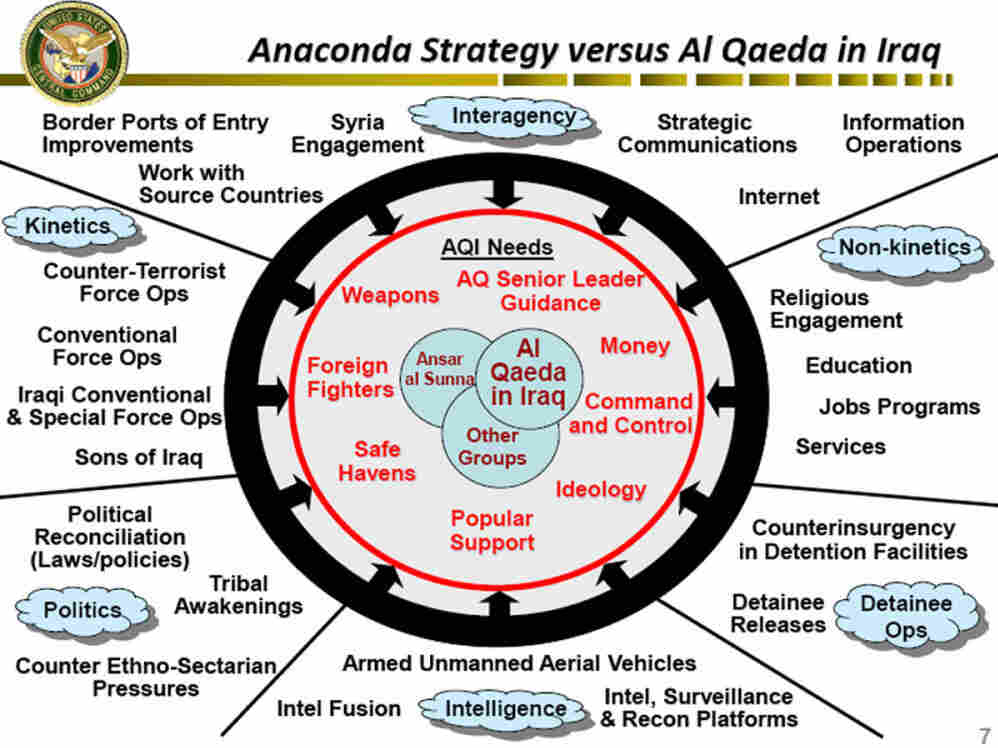 A slide from "CENTCOM Update," a speech Gen. David Petraeus delivered at the Center for a New American Security's 2009 conference. CENTCOM hide caption

More than a year ago, I heard Gen. David Petraeus speak at a conference here, in Washington. Because he was then the head of the U.S. Central Command (CENTCOM) then, his speech centered on the Middle East, its "area of responsibility."

As Petraeus spoke, he constantly referred to PowerPoint slides that were projected on vinyl screens in the hotel ballroom. Some of them were absolutely inscrutable.

Detailed diagrams were surrounded by text, linked with dozens of arrows, highlighted with bright colors. Bar graphs looked blurry. There was no shortage of small maps, tiny photos, and cheesy clip art.

Months later, reporter Elisabeth Bumiller wrote a piece about everything I just complained about in The New York Times: "We Have Met the Enemy and He Is PowerPoint."

"Like an insurgency, PowerPoint has crept into the daily lives of military commanders and reached the level of near obsession," she wrote. "The amount of time expended on PowerPoint, the Microsoft presentation program of computer-generated charts, graphs and bullet points, has made it a running joke in the Pentagon and in Iraq and Afghanistan."

The colonel's rant called into question whether ISAF's revamped command structure, charged with coordinating the day-by-day war effort, was much more than a briefing factory. Or, as Sellin put it, "endless tinkering with PowerPoint slides to conform with the idiosyncrasies of cognitively challenged generals in order to spoon-feed them information."

The incident may revivify a debate that has raged on The Best Defense blog, in Small Wars Journal, and among Army ranks.

Gen. Martin E. Dempsey, the commander of the U.S. Army Training and Doctrine Command, has said "the era of the sage on the stage bludgeoning a student population with PowerPoint is over, so we better figure out how to enrich our soldiers’ learning experiences in a way that challenges them and is consistent with who they are and what they expect."