Accessibility links
From The Archives: Days After Katrina, Michael Chertoff Talks To Robert Siegel : The Two-Way Four days after Hurricane Katrina, NPR's Robert Siegel spoke with Michael Chertoff, then the U.S. Secretary of Homeland Security. He was unaware of how bad things were at the convention center in New Orleans.

7:08
From The Archives: Days After Katrina, Michael Chertoff Talks To Robert Siegel 7:08

From The Archives: Days After Katrina, Michael Chertoff Talks To Robert Siegel 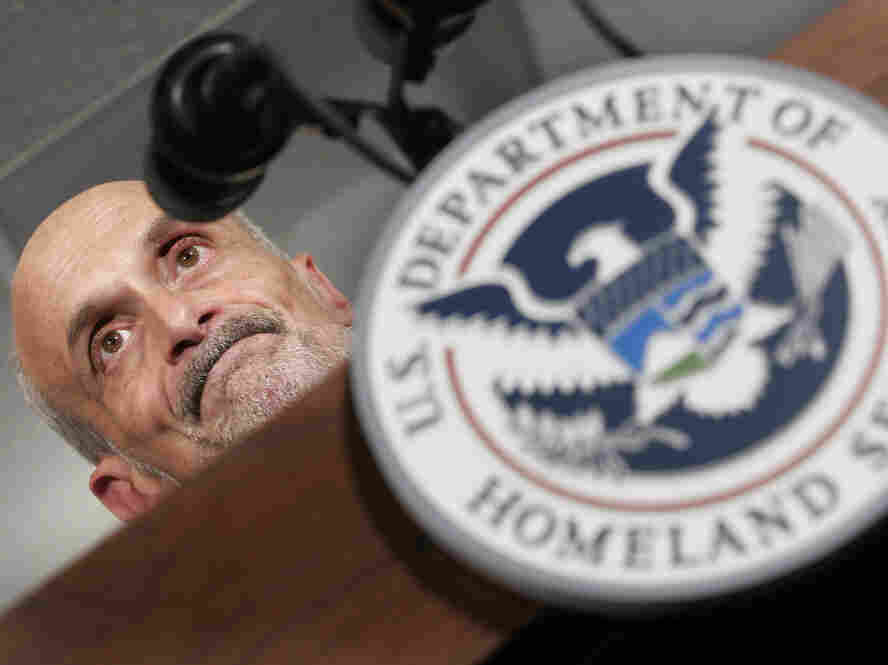 Former Homeland Security Secretary Michael Chertoff at a news conference on Aug, 31, 2005, at which he declared Hurricane Katrina and its aftermath to an "Incident of National Significance." Chip Somodevilla/Getty Images North America hide caption

When Hurricane Katrina made landfall along the Gulf Coast, I was more than a thousand miles away. I remember listening to the radio on Sept. 1, 2005, as the scale and scope of the disaster continued to grow.

On All Things Considered, NPR's Robert Siegel pointed out that, four days after Hurricane Katrina, "people were still being plucked from rooftops."

Officials reported little progress in plugging the damaged levees and flood walls. President Bush has proposed $10 billion for the flooded city and parts of the Gulf Coast hit by the storm. Congress will return to Washington from summer break to approve it.

Heavily armed National Guard were evacuating people out of the squalid conditions of the Superdome. They were boarding buses for the Astrodome in Houston. But it emerged that people stranded at the New Orleans Convention Center about eight blocks away were in more than dire straits.

That evening, Siegel spoke to Michael Chertoff, then the U.S. Secretary for Homeland Security.

What he said in that interview is still astonishing. Especially when you listen to what NPR's John Burnett reported afterward.

SIEGEL: Let me ask you about images that many Americans are seeing today and hearing about. They are from the convention center in New Orleans. A CNN reporter has described thousands of people, he says, many of them--you see them in the pictures, mothers with babies--in the streets, no food, corpses and human waste. Our reporter John Burnett has seen the same things. How many days before your operation finds these people, brings them at least food, water, medical supplies, if not gets them out of there?

Sec. CHERTOFF: Well, first let me tell you there have been deliveries of food, water and medical supplies to the Superdome, and that's happened almost from the very beginning.

SIEGEL: But this is the convention center. These are people who are not allowed inside the Superdome.

Sec. CHERTOFF: Well, but, you know, there have been--we have brought this to the Superdome. There are stations in which we have put water and food and medical supplies. The limiting factor here has not been that we don't have enough supplies. The factor is that we really had a double catastrophe. We not only had a hurricane; we had a second catastrophe, which was a flood. That flood made parts of the city very difficult to get through. If you can't get through the city, you can't deliver supplies. So we have, in fact, using heroic efforts, been getting food and water to distribution centers, to places where people can get them.

SIEGEL: But if those people who haven't gotten them--if they ask our reporter, `When am I going to see those supplies? When does it get to me?'--what's the answer? How many days until it reaches them?

Sec. CHERTOFF: I think the answer is that we are as much as humanly possible--given the fact that we still have feet of water that have not drained out of the city yet, we are moving those foods and supplies as quickly as possible. People need to get to areas that are designated for them to stage for purposes of evacuation. We're contending with the force of Mother Nature and...

SIEGEL: But--and what is your sense? I'm trying--I mean, by the weekend do you expect that everybody in New Orleans will have some kind of food and water delivered by this operation?

Sec. CHERTOFF: I would expect that--unless people are trapped in isolated places that we can't get to, I would expect that everybody's going to have access to food and water and medical care. The key is to get people to staging areas. There are some people who are stranded but who are not in imminent danger. They are not people that we're going to necessarily rescue immediately. We're going to try to them, you know, food and water, so they can sustain themselves until we can pick them up.

SIEGEL: We are hearing from our reporter--and he's on another line right now--thousands of people at the convention center in New Orleans with no food, zero.

Sec. CHERTOFF: As I say, I'm telling you that we are getting food and water to areas where people are staging. And, you know, the one thing about an episode like this is if you talk to someone and you get a rumor or you get someone's anecdotal version of something, I think it's dangerous to extrapolate it all over the place. The limitation here on getting food and water to people is the condition on the ground. And as soon as we can physically move through the ground with these assets, we're going to do that. So...

SIEGEL: But, Mr. Secretary, when you say that there is--we shouldn't listen to rumors, these are things coming from reporters who have not only covered many, many other hurricanes; they've covered wars and refugee camps. These aren't rumors. They're seeing thousands of people there.

Sec. CHERTOFF: Well, I would be--actually I have not heard a report of thousands of people in the convention center who don't have food and water. I can tell you that I know specifically the Superdome, which was the designated staging area for a large number of evacuees, does have food and water. I know we have teams putting food and water out at other designated evacuation areas. So, you know, this isn't--and we've got plenty of food and water if we can get it out to people. And that is the effort we're undertaking.

Burnett listened to the Chertoff interview, then reviewed what he and NPR's Anne Hawke saw that day:

There are, I estimate, 2,000 people living like animals inside the city convention center and around it. They've been there since the hurricane. There's no food. There's absolutely no water. There's no medical treatment. There's no police and no security. And there are two dead bodies lying on the ground and in a wheelchair beside the convention center, both elderly people, both covered with blankets now. We understand that two other elderly people died in the last couple of days. We understand that there was a 10-year-old girl who was raped in the convention center in the last two nights. People are absolutely desperate there. I've never seen anything like this.

They have seen buses go past. They have seen police cars go past. They have had the National Guard visit them. But no one has brought them food or any provisions whatsoever. They're living like animals, very much what the conditions were inside the Superdome. Now the Superdome is being evacuated, and that's a very, very good thing. I think these people want to know, `When on earth are you going to look after us?' They feel abandoned by their city, by their mayor, and they are quite desperate.

There has been looting that's gone on. They broke into a lot of the shops along the riverwalk. And, in fact, a lot of the looters distributed the food and the water that they got to the rest of the group. And so actually very few people are critical of the looters because they've had food to eat because of them.