Accessibility links
'River Of Life -- Congo Odyssey': A Trip Down 'Congo's Grand Boulevard' : The Two-Way NPR's Jonathan Blakely traveled with NPR's Ofeibea Quist-Arcton on the Congo River this summer, for a series that begins today, on 'Morning Edition.' 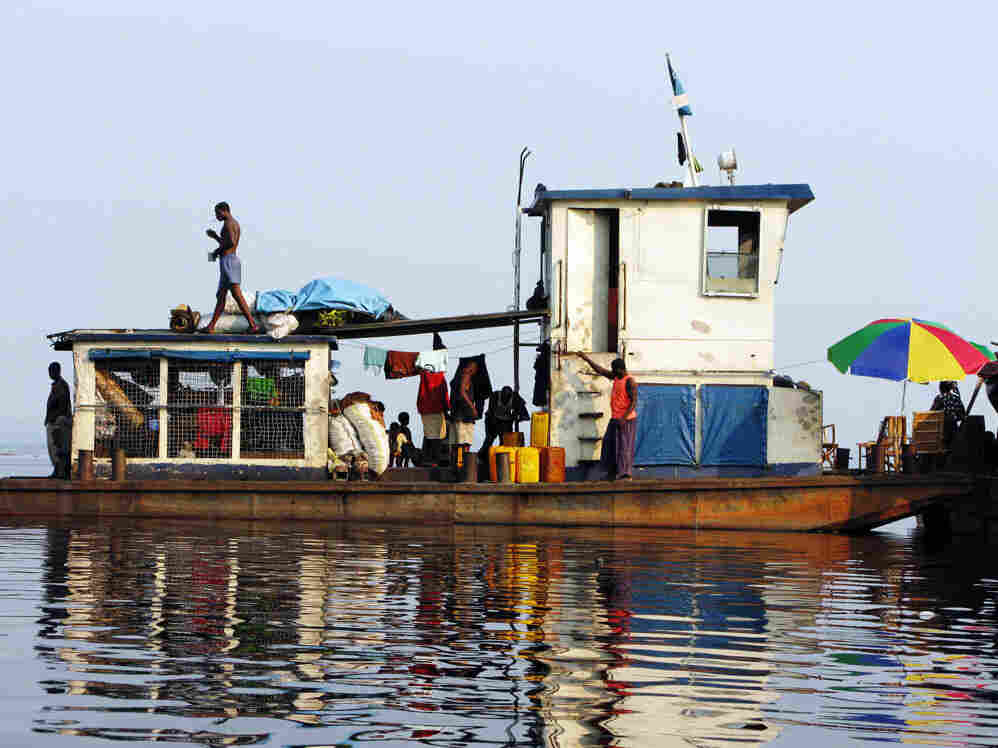 A view of the boat M/B SETB. The boat is pushing two huge barges filled with people, animals and merchandise down the Congo River to Kinshasa.  NPR's Ofeibea Quist Arcton and Jonathan Blakley, and Emery Agalu Makumeno spent most of their seven-day voyage under the big beach umbrella -- next to the head-butting goats. Jonathan Blakely/NPR hide caption

The Democratic Republic of the Congo has been in the headlines in recent days. The African nation -- its eastern part is known as the rape capital of the world -- was the focus of a U.N. Security Council meeting on mass rapes of women and children this summer and the response -- or non-response -- of U.N. peacekeepers. A separate U.N. draft report said the Rwandan army and its Congolese rebel allies committed massacres in Congo in the 1990s that fit the definition of genocide.

Congo, a nation of some 70 million people long buffeted by civil war, violence and turmoil, is the subject of a five-part series that began today on NPR's Morning Edition and npr.org. We've called the series "River of Life - Congo Odyssey."

This summer, NPR's West Africa correspondent Ofeibea Quist-Arcton and I took a 500-mile voyage down the Congo River, the life's blood of the Democratic Republic of the Congo. With few accessible roads outside of major cities, Congo's grand boulevard -- its main highway -- is the Congo River.

Our Congolese colleague, journalist and translator Emery Agalu Makumeno found our mode of transportation: Two barges, about 50 feet long, strapped together side-by-side and pushed by a tugboat called "M/B SETB." (The name of the vessel? M/B stands for "motorboat," and SETB is an acronym for a lumber company that once owned it.)

Barges, stacked high with every type of good imaginable -- from palm oil to used shoes and clothing, to four-wheel-drive vehicles -- travel up and down all parts of the river daily.

And our barge was no different. It was a floating village. Crowded, sweaty, colorful and lively. There were at least 300 people on the barge, mostly families. They brought with them their head-butting goats, monkeys (some as pets, some for stew), huge bags of food staples, chairs, mosquito nets and tarps.

The trip took us along the most navigable (and safest) part of the river, from the port at Mbandaka to Maluku, just outside the capital, Kinshasa.

The view of Congo from the river is spectacular. Its people, like the land, are rugged and beautiful. But the country's history has often been brutal. Some of the people we encountered have lost love ones along that river -- the victims of violence in a seemingly never-ending conflict or tragic happenstance as boats overturn and people drown.

Our barge traveled no faster than 20 mph.  And at times, the sun was grueling. Thanks to one of our "neighbors," Maman Gisele Nzili, we had more than enough fresh Congo River fish to sustain us every day. With our generator, computers, microphones and cameras, Ofeibea, Emery and I were all quite the novelty to the rest of the passengers and crew.  We even earned the nickname, "The Delegation."

But we were part of that barge village.

I got to play pseudo-doctor I used my NPR medical kit to clean and wrap the badly infected finger of Justin Ingbongbo, a student who seemed to double up as an unofficial crew member. And I lost my favorite Detroit Tiger's hat (actually, I gave it away) to a villager who, screaming "le chapeau, le chapeau," insisted I hand it over.

The kids on board the barge or who bathed on the river banks as we passed by village after village called me mundele. As my light-colored skin set me apart from everyone else on the boat, I didn't need a lesson in their native language, Lingala, to know that mundele means "white man." These same kids were stunned when it was explained to them that, as an African American, I am black like President Obama.

It was a fascinating trip in a country struggling with its past and its present yet surviving along the Congo River.