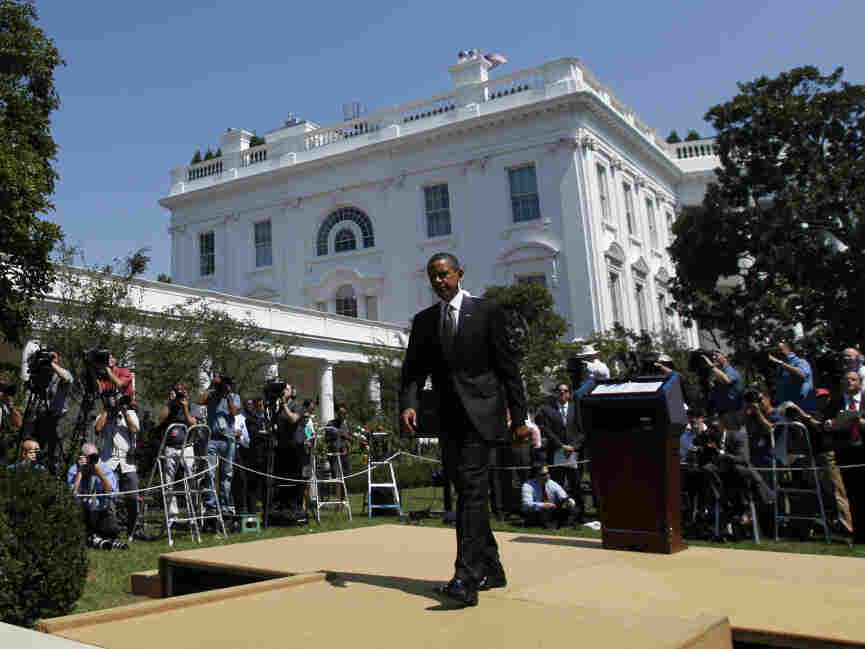 President Barack Obama will deliver a prime-time address to the nation tonight, from the Oval Office at the White House. Pablo Martinez Monsivais/Associated Press hide caption

White House Press Secretary Robert Gibbs spoke with Morning Edition today, as President Obama marks the end of U.S. combat operations in Iraq. Almost everything in our conversation suggested how eager the administration is to move on from Iraq.

"The history of Iraq and the future of Iraq will now be written and determined by the Iraqis.  That’s their responsibility," Gibbs said, as his boss prepared for a speech to the nation tonight.

The last U.S. forces are supposed to leave Iraq at the end of next year. Yet an Iraqi general says his forces need help for another decade.

Could the deadline be moved?

"Not that I’ve heard," Gibbs said, although he seemed to leave space for a possible change: "Iraqi forces are capable of providing security in this country. They'll have responsibility for doing that. We will leave a residual force there to assist in counter terrorism operations if that assistance is needed."

He said this could be discussed with Iraq’s government, whenever one exists. Negotiators have been unable to assemble a governing coalition since the election last spring.

Many surveys show that Americans no longer consider Iraq one of the top issues facing the country. And Gibbs said that the president will move the Iraq speech toward issues that concern Americans more.

"What the president will discuss tonight is not just the ending of our combat mission, but what we're doing to strengthen our security, and what we have to do to rebuild our nation here at home."

That last phrase -- rebuilding the nation at home -- gets to the real political problem of the moment.  In the last month, the stock market has staggered under news suggesting U.S. economy may be weakening again.

"I don't think there's any doubt," Gibbs acknowledged,  "that if you look at where we were in the early spring, and then look at what happened in Europe, that we are on a different trajectory."

Naturally, he blamed this on European government debt problems rather than any policies of the Obama administration; and Gibbs argued that the economy is still growing, better than a "year and a half ago when our economy was contracting."

As they head into Congressional elections this fall, Democrats will be struggling to make that explanation stick -- arguing that people may be frustrated, but the situation used to be worse.  Republicans, of course, agree that people are frustrated and dismiss all the rest.

Earlier this summer, Gibbs acknowledged that there was "no doubt" that Republicans had a chance to win enough seats to capture the House of Representatives -- not that Democrats would lose, but that they could.

Gibbs was fiercely criticized, as politicians often are, for stating the obvious.  Every survey puts Democratic candidates in trouble right now. The only question is how much trouble they will face in November.

Asked today if he still thinks there is "no doubt" that Democrats could lose control, Gibbs said only that he expects a “robust” election.