Accessibility links
Tony Blair On War, Globalization And 'My Political Life' : The Two-Way The former prime minister of the United Kingdom's memoir, My Life: A Political Journey, is on sale in the U.S. Blair spoke to Steve Inskeep about Iraq, globalization and his political career. 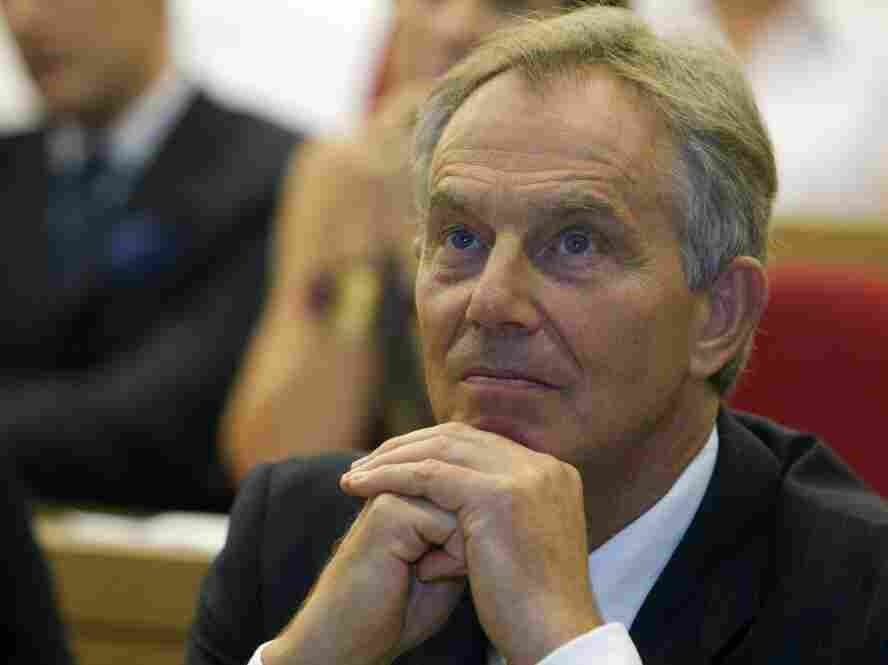 This week, Knopf will publish A Journey: My Political Life, Tony Blair's memoir.

NPR's Steve Inskeep had a conversation with the former prime minister of the United Kingdom, focusing on the war in Iraq, globalization, and Blair's political career.

Inskeep asked Blair for a "word or a sentence or a phrase" that would describe how he feels about the war in Iraq, some seven years after it began.

In the interview, as in his book, Blair chose to say that he has "a deep sense of responsibility," which prompted this exchange:

INSKEEP: That's the word that you gave in the book that you said is actually kind of a dodge.

BLAIR: Well, it's not a dodge. Why do you say that?

INSKEEP: Well, responsibility means you are responsible. But, I'm just curious, if regret is not a fair word to ask you to attach or deny, I'm just wondering what word is a fair word?

BLAIR: Well, regret, as I say in the book, you would be inhuman if you didn't feel you know devastated by the loss of life, and by the people who have died, our soldiers, your soldiers, the civilians, but you can't say I regret a decision if you actually think it was the right decision.

Blair has promised to give all proceeds from the book, including his advance, to the Royal British Legion, which aids wounded veterans.

Inskeep asked Blair to respond to an editorial by Daily Mirror columnist Tony Parsons, entitled "Tony Blair should amputate a limb and give that to the British Legion," which includes this sentence: "Boys will be in wheelchairs for the rest of their lives because of this pious, Bible-bashing hypocrite."

Blair, responding to criticism in the 'Daily Mirror.'

BLAIR: I'm afraid one of the things that happens in a situation like this is that people, you know, find it hard to have a debate about this that doesn't turn into just abuse. You have, I'm afraid, as a politician, to get inured to that type of attack, because the decisions you take are decisions you take for the reasons that you give and you have to stand by those and defend those.

Blair said the prevailing narrative about the West's relationship with the Middle East is problematic -- and has to be changed:

Blair, on the prevailing narrative.

"We've got to get ourselves out of the position, in the West, of believing we are causing this terrorism," he said. "Or when these people drive carbombs into, whethere it's Baghdad or Kabul or parts of Pakistan or anywhere else, that somehow this is something we have caused."

This is something we are having to confront, and when we remove -- I mean, 'cause let's be clear, let's have it as a matter of consensus, the Taliban, you know, a terrible regime, Saddam was a terrible dictator -- when we remove those dictatorships, we then give people the chance of a different way of life with funding, with a democratic election supervised by the United Nations. And remember, U.K. and U.S. forces were in Iraq from mid-2003 with full United Nations backing. If terrorists come in and disrupt that, that's something we should be standing up to, not something we then say, well if these people are going to come in and do this, maybe we shouldn't be there.

Blair presented an "alternative narrative," in which the West's position is "the right way to live is for people to coexist peacefully from different cultures, different races, different religious faiths, alongside each other."

Blair, on an alternative narrative.

And that narrative doesn't just apply to us, in the West, it also applies to countries where the majority of the population are Muslims, and that's the world we want to create, and that competing narrative that is about modernization embracing globalization as an opportunity, educating people to be open to the other person, I think that's the challenge of the 21st century.

Blair discussed his political career and his approach to politics. He said good politicians have "an intuitive grasp of people."

According to Blair, manipulation -- in a non-pejorative sense, he added -- is incredibly important. A politician must be well-versed in persuasion. He or she must know how to shape and communicate ideas.

You can read an excerpt from My Life: A Political Journey here.