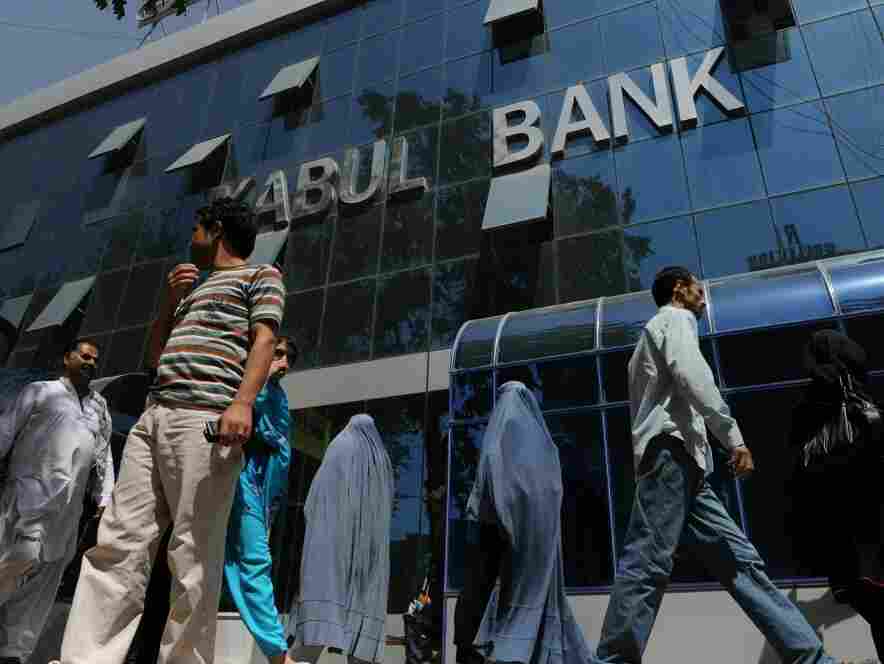 Something of a bank run appears to be underway in Afghanistan as scared depositors pull their money out of Kabul Bank, or try to.

The withdrawals by Kabul Bank depositors was triggered by news that two top bank officials left the institution earlier this week as corruption allegations swirled around the bank.

The two officials were reportedly involved in unauthorized investments involving about $160 million in Dubai real estate, according to a big shareholder in the bank, Mahmoud Karzai, the older brother of Afghan President Hamid Karzai.

Mahmoud is making a suggestion that is likely to gain very little traction in Washington: he's calling for the U.S. to bail out Kabul Bank.

An excerpt from the Washington Post which has been closely tracking the Kabul Bank story:

Action by the United States, said Mahmoud Karzai, would prevent a run on Kabul Bank and protect other banks, too. He said Kabul Bank is "stable and has money" but cannot withstand a stampede by panicked depositors.

"If the Treasury Department will guarantee that everyone will get their money, maybe that will work," said Karzai, who holds 7 percent of the bank's shares, making him the third-biggest shareholder. Karzai, who spends most of his time in Dubai - where he lives in a waterfront villa paid for by Kabul Bank - rushed to Kabul on Wednesday to join efforts to salvage the bank.

The Afghan central bank stepped in earlier in the week to support the Kabul Bank. But Mahmoud Karzai's comments suggest that action hasn't ended the crisis.

Other Afghan officials have played down the withdrawals by depositors. From the Financial Times:

But the same story provides some much less sanguine indications:

“I have $15,000 deposited and now they are telling me they are out of money, and I was able to take only $1,000,” Haji Tamim Sohraby, 24, who owns a construction company, told Bloomberg News.

The New York Times and The Wall Street Journal reported Wednesday that Kabul Bank's losses could exceed $300 million - and that the figure is more than the bank's assets. The Washington Post reported that the central bank had ordered the newly resigned chairman to hand over $160 million in real estate holdings in Dubai purchased for relatives and friends of the political elite.

Even though it was "out of his lane" as Pentagon people say when they're asked about a subject beyond their expertise or authority, Defense Secretary Robert Gates was pulled into the banking crisis Thursday during his visit to Kabul.

Visiting U.S. Defense Secretary Robert Gates said he believed the central bank and Ministry of Finance had acted prudently over the issue and had sought to reassure depositors.

"As I understand it, the bank is open, last time I checked it was providing money to the depositors that wanted it, the government, the central bank has provided additional cash to them that was on deposit with them," Gates told reporters in Kabul.