Accessibility links
Amtrak Unveils Its Vision For 2040: Travel From D.C. To New York City In 96 Minutes : The Two-Way In Philadelphia today, Amtrak's president presented an optimistic view of what high-speed rail could look like in 2040.

Amtrak Unveils Its Vision For 2040: Travel From D.C. To New York City In 96 Minutes

Amtrak Unveils Its Vision For 2040: Travel From D.C. To New York City In 96 Minutes 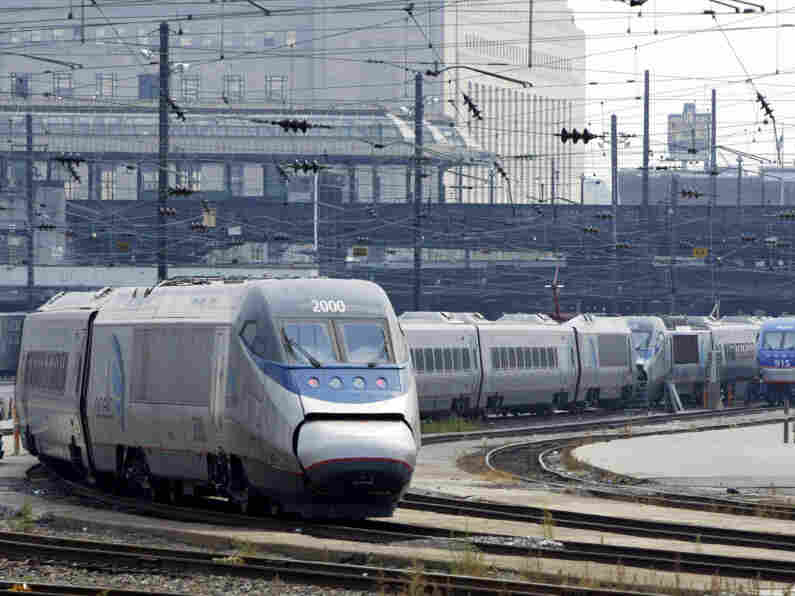 In Philadelphia today, Amtrak unveiled "A Vision for High-Speed Rail in the Northeast Corridor." There's plenty of stuff to swoon over -- or daydream about: Washington to New York City in 96 minutes?! Manhattan to Boston in 84 minutes?!

If "the nation's intercity passenger rail operator" gets its way, this is what train travel could look like in 2040:

...high-speed train ridership would approach 18 million passengers with room to accommodate up to 80 million annually as demand increases in the years and decades that follow. Departures of high-speed trains would expand from an average of one to four per hour in each direction, with additional service in the peak periods, and total daily high-speed rail departures would increase from 42 today to as many as 148 in 2040.

The service would generate an annual operating surplus of approximately $900 million and its construction would create more than 40,000 full-time jobs annually over a 25-year construction period to build the new track, tunnels, bridges, stations, and other infrastructure.

Again, it sounds good. But is it feasible?

Matt Yglesias says that the plan's price tag -- $117 billion -- "highlights the central problem with our current approach to rail."

The Obama administration’s high-speed rail initiative is not only pretty stingy, it’s also spread incredibly thin because that’s what you get when you need to frame initiatives that can be approved by a congress based on representing distinct geographical areas. Any kind of national legislation that would raise $117 billion for northeast rail service would need to also spend a ton of money on rail service elsewhere in the country where the case for massive investment is much weaker. We’re essentially destined to be perennially under-investing in the northeast corridor and a handful of promising city pairs (Tampa-Orlando, Portland-Seattle) scattered around the country while sporadically over-investing elsewhere.

A Vision for High-Speed Rail in the Northeast Corridor