Accessibility links
New U.N. Report Documents Atrocities Against Democratic Republic Of The Congo : The Two-Way The United Nations delayed releasing the report, to give Rwanda a chance to comment on it. The country, which comes out looking the worst, has called it "unacceptable" and an "insult to history." 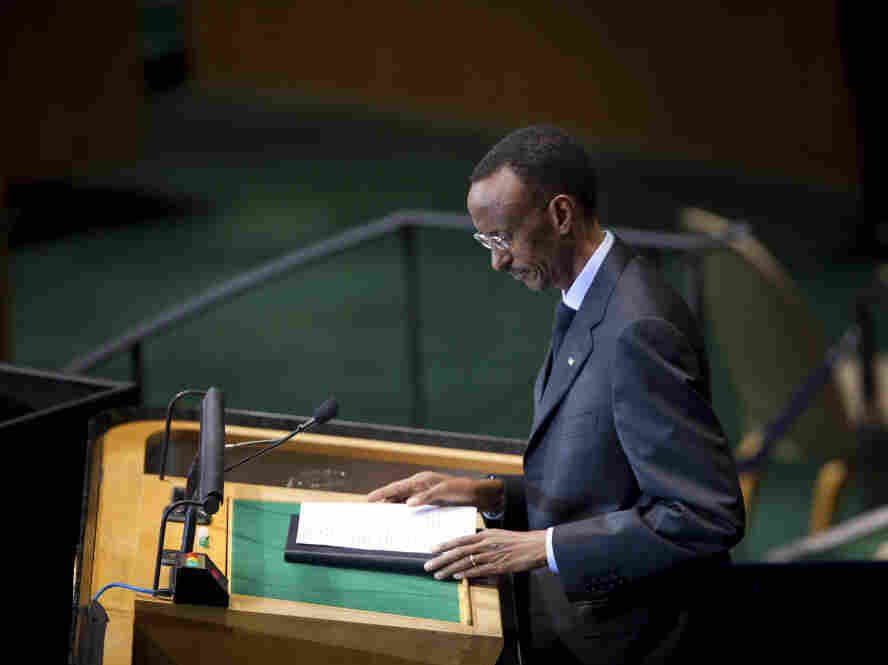 President of the Republic of Rwanda Paul Kagame had threatened to pull his troops out of the U.N. peacekeeping operation in Darfur, Sudan, because of the report. Michael Nagle/Getty Images hide caption

United Nations High Commissioner for Human Rights Navi Pillay says Congolese men and women crave truth and justice -- and they have gone too long without it.  She's hoping that will change now that she's released a report that documents years of atrocities against civilians in the Democratic Republic of the Congo.

The Mapping Exercise covers 600 incidents from 1993-2003, a period that included the first Congo war, when Mobutu Sese Seko's regime was overthrown, and a second conflict involved many rebel movements and eight African nations.

Of all the armies involved, Rwanda's comes out looking the worst in this report, according to Jason Stearns, a former U.N. investigator who is now writing a book about Congo. He says the report documents how Rwandan troops, after ending a Genocide in their own country, crossed into Congo to pursue Hutu rebels:

In pursuit, they hunted down not only soldiers, who perhaps were involved in the genocide but they also targeted a great number of civilians, including old men and women, infants, pregnant women, people, who by no stretch of the imagination could have been combatants.

Rwanda called the report "unacceptable" and an "insult to history." The U.N. delayed issuing it to give Rwanda a chance to formally comment on it. U.N. diplomats also used the time to persuade Rwandan President Paul Kagame to back off from his threat to pull his troops out of the U.N. peacekeeping operation in Darfur, Sudan.

Stearns says Rwanda probably hopes that this report will be swept under the rug now that it has been published. However, he is hoping that this lengthy document will help Congo come to terms with its recent past. (Unlike Yugoslavia or Sierra Leone, Congo has seen no tribunals and no accountability.)

Stearns says that, as he traveled through Eastern Congo, he spoke with many people who had lost relatives and friends. "There are no graves ... no monuments ... and they don’t even know what happened," he tells NPR.

In addition, some of the rebel leaders and army commanders carrying out atrocities today in Eastern Congo are the same ones who carried out crimes against civilians 10 years ago. He says that "puts lie to the idea that we need to have peace before justice."

Democratic Republic of the Congo Report