Accessibility links
Which D.C. Rally Drew More People? AP Gives Nod To Glenn Beck's : The Two-Way The crowd at conservative broadcaster Beck's gathering in August spread over more of the area between the Lincoln Memorial and Washington Monument than that at Saturday's gathering of liberal groups, AP reports. 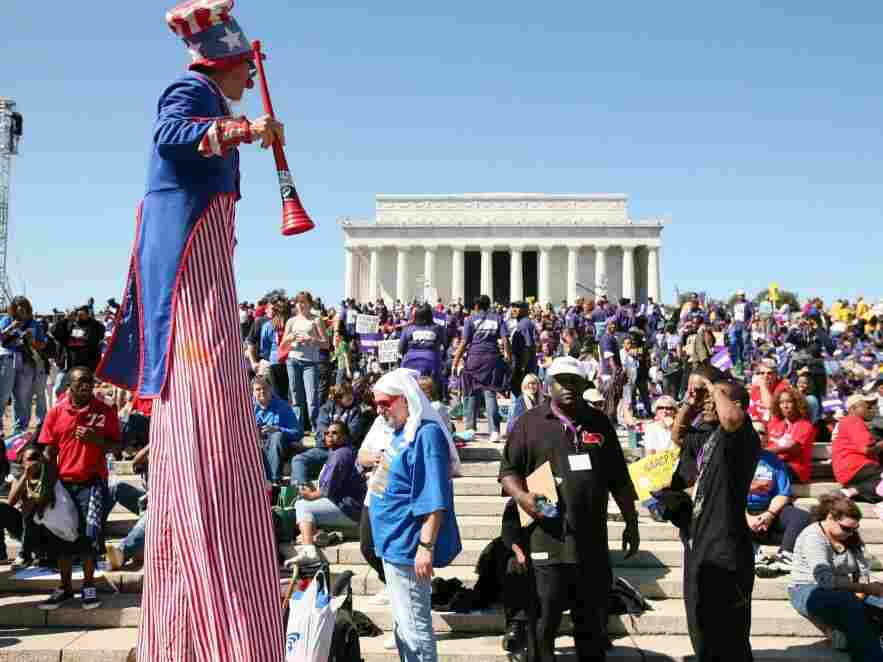 The scene at the Lincoln Memorial. Logan Mock-Bunting/Getty hide caption

There are going to be arguments about this anyway, so let's get right to the issue of how many people were at Saturday's "One Nation Working Together" rally in Washington, D.C., and how the crowd at that liberal gathering compared in size to the Aug. 28 "Restoring Honor" rally held by conservative broadcaster Glenn Beck.

According to the Associated Press:

"Organizers claimed they had as many participants as Beck's rally. But Saturday's crowds were less dense and didn't reach as far to the edges as they did during Beck's rally. The National Park Service stopped providing official crowd estimates in the 1990s."

"More than 400 groups endorsed the 'One Nation Working Together' rally, which organizers said drew a crowd of 175,000 people -- about what they expected. Beck has estimated that 500,000 people came to his gathering."

Bear in mind that CBS News paid for some analysis of the crowd size at Beck's rally and was told that about 87,000 folks came.

NPR's Allison Keyes reported for Weekend Edition Sunday, meanwhile, that Saturday's "diverse crowd of activists filled the steps of the Lincoln Memorial and lined the reflecting pool in rows nearly all the way to the Washington Monument." Among the speakers at the "One Nation" rally was one of Beck's broadcasting rivals from the liberal side -- MSNBC's Ed Schultz.

The next D.C. event that will likely spark "who's rally was bigger?" kind of talk will be the Oct. 30 Jon Stewart/Stephen Colbert "Restore Sanity / Keep Fear Alive" show.

By the way, Frank wrote last night, over at It's All Politics, about yesterday's rally. He says the really important thing to keep in mind is how it undescored that "people who are ideologically left-of-center are frustrated too, just like those in the Tea Party movement."