Accessibility links
Dutch Politician On Trial For Comparing Koran To Mein Kampf : The Two-Way A right wing politician in the Netherlands went on trial today for "inciting hatred and discrimination against Muslims." Geert Wilders compared the Koran to Mein Kampf.

Dutch Politician On Trial For Comparing Koran To Mein Kampf

Dutch Politician On Trial For Comparing Koran To Mein Kampf

In yet one more reminder that the Netherlands and America operate under very different rules, a Dutch lawmaker went on trial today for "inciting hatred and discrimination against Muslims." Geert Wilders compared the Koran to Mein Kampf in an editorial and then released a film which showed violence against women, beheadings, and the aftermath of terrorist attacks, and then compared those images to verses from the Koran. 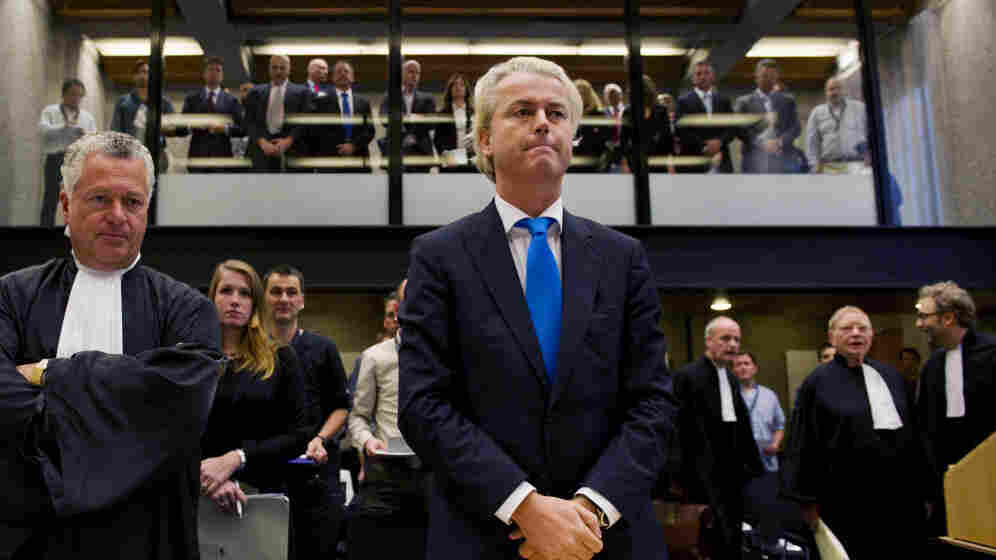 Wilders is also part of a small party that is a key player in forming a new ruling coalition in the Dutch parliament. That's supposed to be decided tomorrow.

In court today, Wilders was unrepentant. "I have said what I have said and I will not take one word back," he told the court before invoking his right to remain silent. Then, according to Reuters:

That stance prompted the presiding judge to say that Wilders had been accused by others of avoiding debate and that it appeared he was doing the same again today.

Wilders's lawyer objected to the judge's comments, saying
they could be construed as bias, leading to a separate hearing.

"I find it ... inappropriate, improper and even scandalous that the chairman of the court interprets this and commentates on it," Wilders said at the separate hearing.

"The appearance of bias ... has been invoked. A fair process is no longer possible."

The judges then adjourned the separate hearing and the trial itself and will hand down a decision on Tuesday afternoon on the issue of the judges' impartiality.

Wilders faces up to a year in prison if convicted.