Accessibility links
Noise From Consumers Prompts SunChips To Return To Traditional, Quieter Bags : The Two-Way Frito-Lay was excited to unveil a bag that could be composted, but consumers reacted strongly to the packaging, which is much louder than its plastic predecessor. The company has decided to make the old version available again. 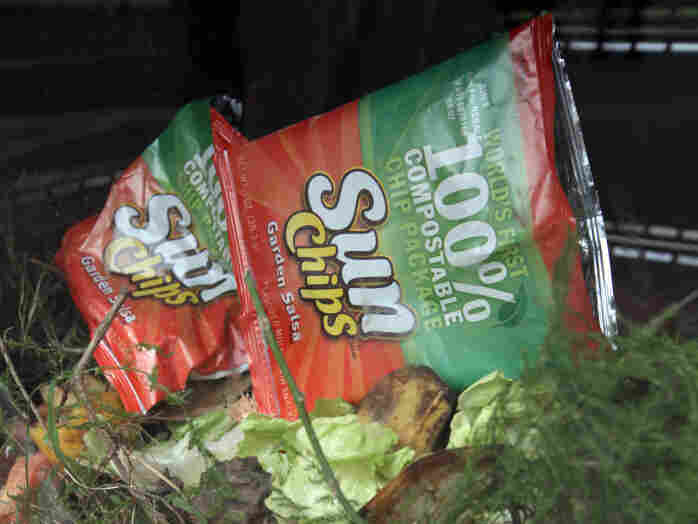 A few weeks ago, an NPR coworker brought Frank James and me some SunChips.

The bag they came in -- which is "100 percent compostable" and made from plant products, apparently -- was big and shiny and, when we dared to touch it, noisy. Really noisy, actually. To steal a description from our friends at Gizmodo, it was "hilariously, ear-damagingly loud."

Here's audio of NPR's Mary Louise Kelly, opening one of the bags:

In August, The Wall Street Journal reported on the new packaging:

It is louder than "the cockpit of my jet," said J. Scot Heathman, an Air Force pilot, in a video probing the issue that he posted on his blog under the headline "Potato Chip Technology That Destroys Your Hearing." Mr. Heathman tested the loudness using a RadioShack sound meter. He squeezed the bag and recorded a 95 decibel level. A bag of Tostitos Scoops chips (another Frito-Lay brand, in bags made from plastic) measured 77.

SunChips has decided to bring back traditional, non-plant-based bags:

While there was a huge amount of enthusiasm surrounding the launch of our compostable SunChips bag, we've also received feedback regarding how the new packaging has affected the consumer experience, including its noise. In response, we’re taking steps to improve our 100 percent compostable bag in order to address your concerns. We have several new compostable package options in the works that look promising and look forward to introducing the next generation compostable bag to consumers in the near future.

While some SunChips will continue to be available in the loud bag, consumers will be able to buy chips in the traditional plastic packaging again.

In an interview with Kelly, Brad Rogers, Frito-Lay's North America's manager of sustainable packaging, said that "it is definitely a different sound than the conventional packaging that we would typically utilize. It's kind of a louder, higher-pitched noise."

The bag was widely ridiculed and derided. Soon, there were new Facebook groups: "Nothing is louder than a SunChips bag" and "I wanted SunChips but my roommate was sleeping..." among them.

Frito-Lay spokesman Chris Kuechenmeister said it wasn't a failure for the company. "We broke new ground," he argues.

For Rogers and his colleagues, it's back to the drawing board:

"There's no such thing as the perfect package," Brad Rogers said.

We always knew that anything that we introduced was never going to be exactly perfect, because there is no such thing as the perfect package. But what we could do is bring something to market, measure that response, and then work to improve it and make it better.