Accessibility links
Military And Scientists Find New Suspects In Dying Beehives : The Two-Way A collaboration between military and civilian researchers has found that a virus and a fungus working together may be responsible for beehives dying from colony collapse disorder. 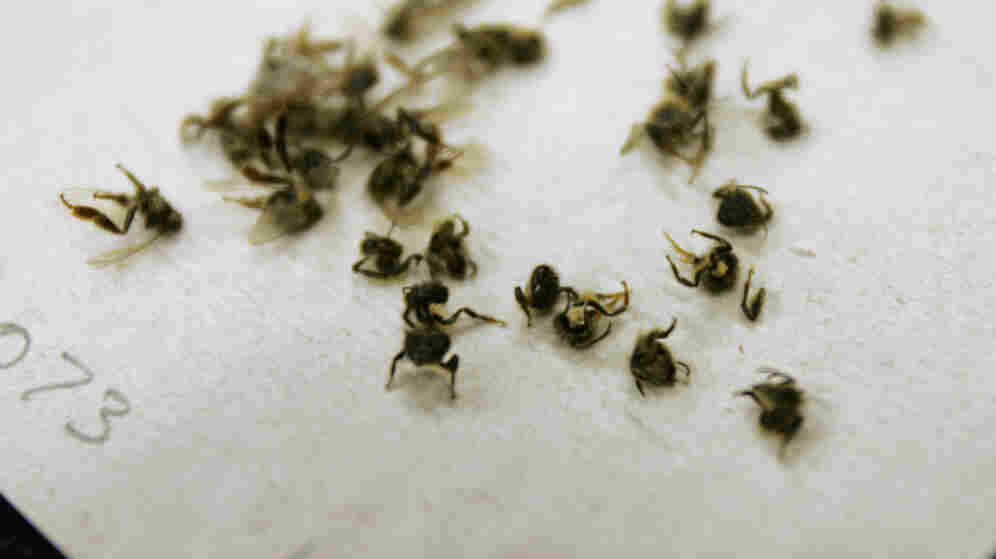 In the past few years, bee colonies around the United States have just been dying. And what has been killing them off has been a mystery. But now a collaboration between civilian and military researchers may shed new light on "colony collapse disorder," or CCD.

In a paper published today in the online journal PLoS One, researchers at the University of Montana and at the Army’s Edgewood Chemical Biological Center joined forces to address a problem neither could have solved on their own.They found that a virus and a fungus work together in hives with CCD. From the New York Times report.

Research at the University of California, San Francisco, had already identified the fungus as part of the problem. And several RNA-based viruses had been detected as well. But the Army/Montana team, using a new software system developed by the military for analyzing proteins, uncovered a new DNA-based virus, and established a linkage to the fungus, called N. ceranae.

"Our mission is to have detection capability to protect the people in the field from anything biological," said Charles H. Wick, a microbiologist at Edgewood. Bees, Wick said, proved to be a perfect opportunity to see what the Army's analytic software tool could do. "We brought it to bear on this bee question, which is how we field-tested it," he said.

The Army software system — an advance itself in the growing field of protein research, or proteomics — is designed to test and identify biological agents in circumstances where commanders might have no idea what sort of threat they face. The system searches out the unique proteins in a sample, then identifies a virus or other microscopic life form based on the proteins it is known to contain. The power of that idea in military or bee defense is immense, researchers say, in that it allows them to use what they already know to find something they did not even know they were looking for.