Accessibility links
Remembering The USS Cole, A Decade After The Naval Destroyer Was Attacked : The Two-Way On Oct. 12, the state-of-the-art vessel was attacked by two al-Qaida operatives, piloting a small boat filled with explosives. The incident killed 17 U.S. sailors. 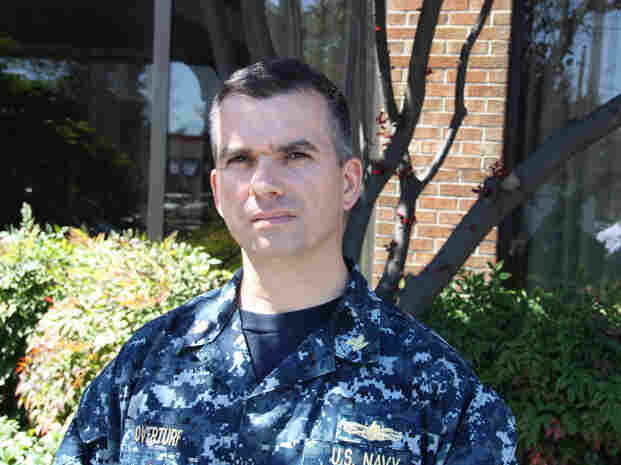 Oct. 12 is the 10th anniversary of the bombing of the USS Cole.

On this day in 2000, the Aegis Guided Missile Destroyer pulled into the Port of Aden in Yemen. As it refueled, two al-Qaida recruits approached the vessel in a small boat that was loaded with explosives. They blew a 40-foot-wide hole in the side of the ship, killed 17 Americans and wounded dozens more.

Cmdr. Kirk S. Lippold (Ret.) told America Abroad Media "you could feel all 505 feet and 840 tons of Guided Missile Destroyer violently thrust up and to the right."

Lights went out, and within a matter of seconds, I knew we'd been attacked. In my mind, first and foremost is, "What's the status of the ship?" because if you can't save the ship,  you certainly aren't going to be able to save the crew.

I don't know if there were going to be follow-on attacks. I pulled out a 9 mm pistol, loaded it, de-cocked it, went down and outside prepared to defend the ship.

Robert Overturf, a supply officer in the U.S. Navy, said "it was a million sounds in one."

The sound of buckling, ripping, shredding metal. The sound of ... everything. It was like being inside of a drum.

Then, everything was silent.

"Shortly thereafter, wounded started coming back to the repair locker," he said. "And I opened up the laundry -- it was the largest space."

So, we started bringing wounded back. And we had people with broken legs, broken jaws, bloodied. It was a little bit difficult to process what was going on when you're seeing people that you'd just seen moments earlier, laughing, joking, having a good time, and the next moment they're wounded. Hurt bad.

This story was produced by Matt Ozug for America Abroad, PRI's monthly international affairs program. You can listen to the "Remembering the Cole" documentary in its entirety here.