Accessibility links
The Greatness Of Ambition Made Real In The Alps : The Two-Way The Gotthard Base Tunnel is the longest tunnel in the world, cutting through some of the most treacherous mountains in Switzerland. It is an awe inspiring feat that one can't help but compare to the debates over American infrastructure.

The Greatness Of Ambition Made Real In The Alps

The Greatness Of Ambition Made Real In The Alps 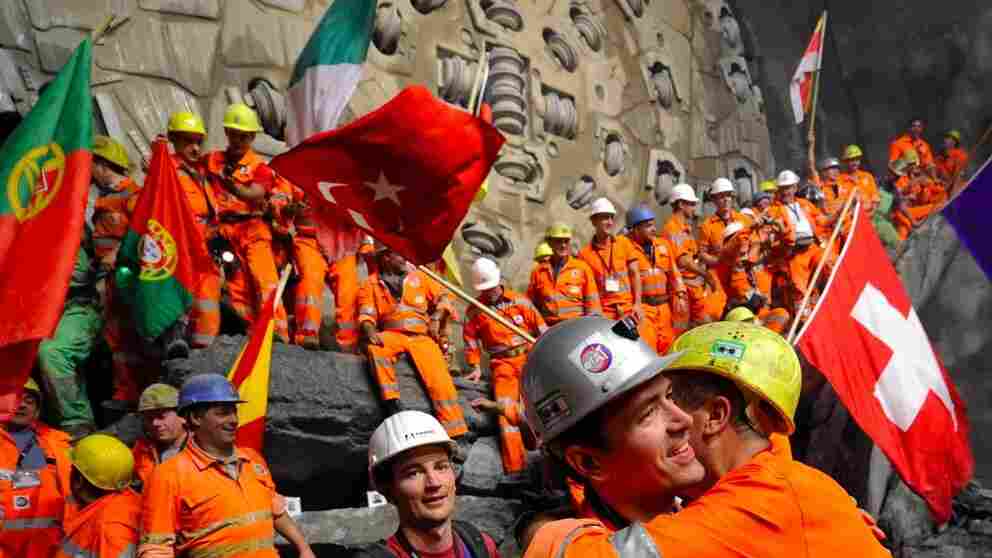 Miners hug after a giant drilling machine completed the world's longest tunnel beneath the Swiss Alps during a ceremony on October 15, 2010, 30 kilometres (19 miles) from one end and 2,000 metres below the mountains near Sedrun. FABRICE COFFRINI/AFP/Getty Images/AFP hide caption

There is a certain majesty in projects of grand engineering. A majesty and an ambition to reshape the very make up of the world. You can't stand before the Hoover Dam, or transit the Panama Canal, or drive over the Golden Gate Bridge without being moved. They are sublime in their impact, symphonies of concrete and steel that just make you proud to be human.

Looking at the images this morning from the completing of the cut of the Gotthard Base Tunnel in Switzerland evokes similar feelings. These great boring machines, these worms as they're called, have been gnawing towards each other for years. The conquest of the Gotthard crossing was one of the most important in the history of Switzerland, and Europe. From the New Yorker:

The Gotthard Massif is one of the Continent’s great divides. It separates north from south, German from Italian, the African tectonic plate from the European. Four major rivers and four mountain ranges meet there, in a series of peaks that rise to more than ten thousand feet. It is the only Alpine range, Goethe wrote, “that deserves to be called royal.”

The pass and then the original tunnel, higher up and shorter, were so important a trade route, a route of people, and goods, and information, that Swiss troops were concentrated there in World War II. And Swiss citizens decided the Gotthard Base Tunnel was important enough they would tax themselves to pay for it, about $1300 each. Every man, woman, and child. This is not just a project of engineers, it is a project of a people.

One can't help but compare ourselves to the spirit of a people who would build something of this ambition. New Jersey Governor Chris Christie cancels the biggest infrastructure project in the United States because $8.7 billion is just too much. President Obama calls for billions in infrastructure projects that seem more like treading water than any sort of reach for greatness. We've run up so much debt even the smallest of projects have to be debated. Even the biggest public works project in recent history, the Big Dig in Boston, cost some $15 billion, and while certainly complicated, is far from inspiring.

And then you hear of the network of high speed trains, and whole new cities being built in China, and you compare it to our seemingly petty debates over building a commuter tunnel. And then you see a machine that bore through miles of rock deep in the earth. And then you look at the faces of the workers who labored underground for years as the final cut is made. And then you think, I wish we felt like that. 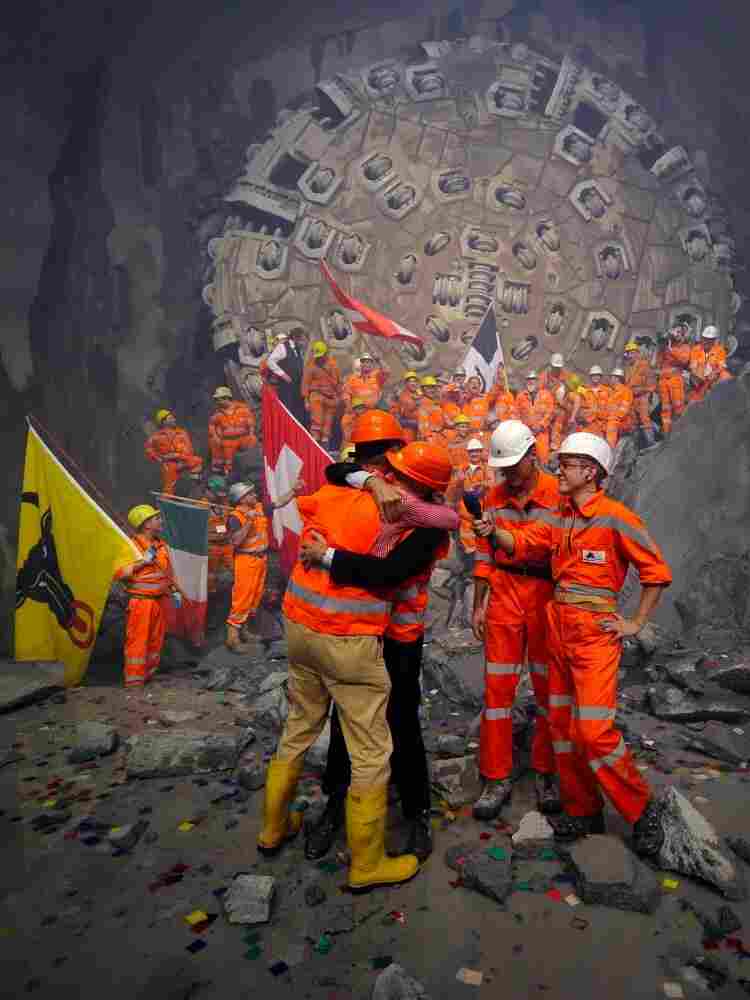 The Swiss celebrate the final cut of the Gotthard Base Tunnel through the Alps today. FABRICE COFFRINI/AFP/Getty Images/AFP hide caption