Accessibility links
Clarence Thomas' Former Girlfriend Breaks Her Silence : The Two-Way Virginia Thomas' request that Anita Hill apologize for accusing Clarence Thomas of sexual harassment during his Supreme Court confirmation hearings in 1991 has prompted Thomas' former girlfriend to break her silence about the man she used to date. 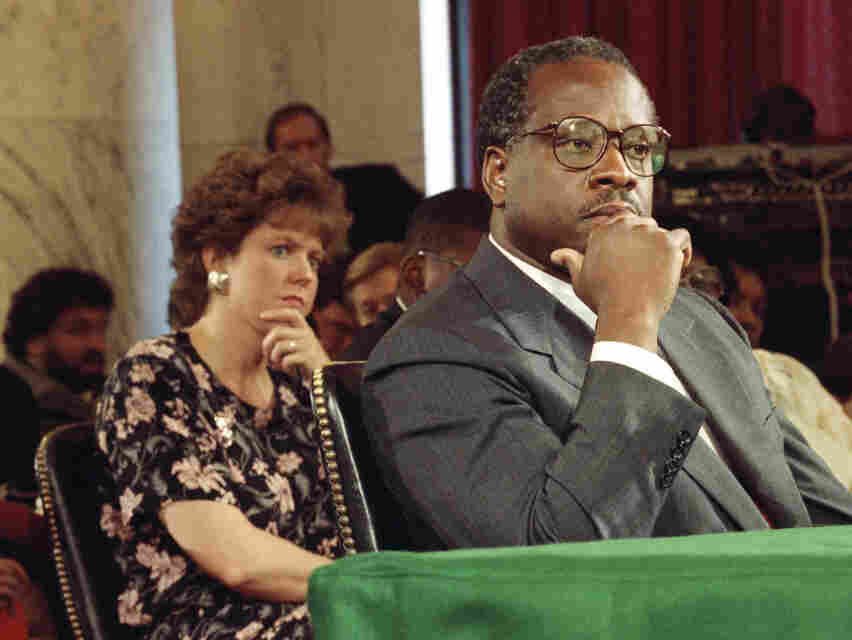 Virginia Thomas' request for an apology from Anita Hill for accusing Clarence Thomas of sexual harassment during his Supreme Court confirmation hearings in 1991 has prompted Thomas' former girlfriend to break her silence about the man she used to date.

Lillian McEwen agreed to speak about Clarence Thomas with Washington Post reporter Michael Fletcher, whose story quotes her as saying that Thomas was "always actively watching the women he worked with to see if they could be potential partners. It was a hobby of his."

McEwen and Thomas had dated in the late 1970s and early '80s. As for why she has now decided to speak out, Fletcher says, "She felt that for too long, in her view, Clarence Thomas had sort of painted himself as a victim in this. And she wanted to give a fuller description of the Clarence Thomas she knew."

McEwen did not testify back in 1991. Fletcher says that she simply wasn't asked. Then-Sen. Joseph Biden, who was running the confirmation hearings, had decided the panel would only call on witnesses who had worked with Thomas.

Now a retired lawyer and an administrative law judge, McEwen has written a memoir about her life -- from growing up in Washington, D.C., to her professional and personal experiences.

Her story also includes explicit details of her relationship with Thomas, which she said included a freewheeling sex life.

Given that history, she said Hill's long-ago description of Thomas's behavior resonated with her.

McEwen added that she had no problem with Thomas's interests, although she found pornography to be "boring."

Fletcher says that after speaking with McEwen, he contacted the Supreme Court to give Thomas an opportunity to respond to her statements. But he was told that Thomas was away, and unavailable to comment.

And in an odd coincidence, Fletcher says, McEwen's tasks at the Justice Department once included helping to vet candidates for the Supreme Court.