Accessibility links
French Protests Enter 7th Week : The Two-Way Trash is piling in the streets, about a quarter of the countries gas stations have run dry. Workers are still blocking refineries, ports and trash incinerators. The action is costing France more than 500 million dollars a day. 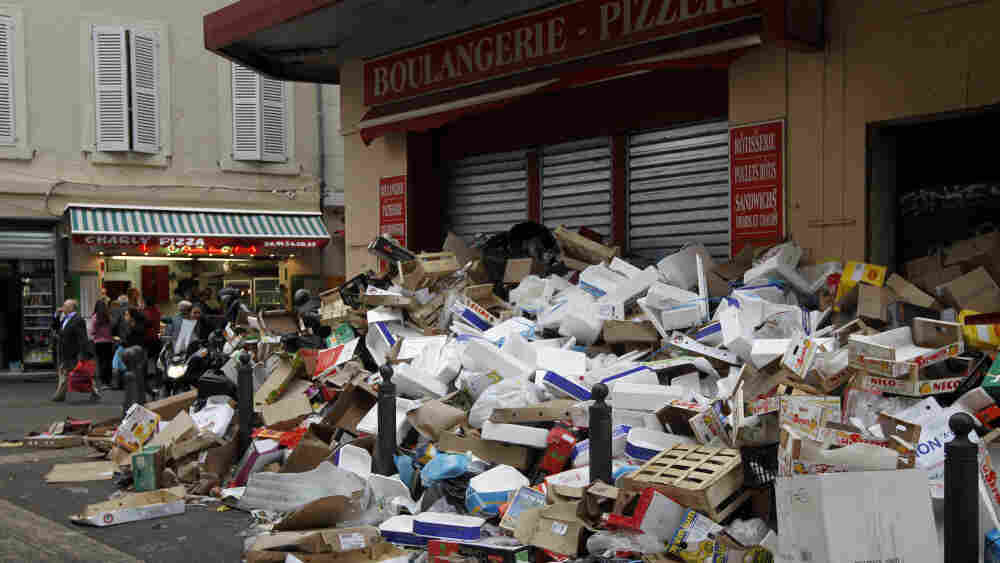 For seven weeks workers in France have been out on the streets. The massive strikes are taking a toll. Thousands of tons of trash lie in the streets of Marseille. About a quarter of the country's gas stations are out of fuel. And unions are calling for larger marches tomorrow and Thursday.

And Dow Jones reports the economic cost has been high as well.

Finance Minister Christine Lagarde on Monday estimated the country's economy is losing EUR200 million-EUR400 million a day as the strikes continue. Lagarde said that the union-led actions could weigh on France's economic recovery from the recent global recession.

CGPME, an industry group defending interests of small and medium companies, estimated the strikes have cost EUR4 billion so far and said the protests threaten the country's economic recovery.

The country's chief business lobby, MEDEF, warned of the serious impact strikes are having on business, pointing to blocked deliveries of goods and raw materials by rail and truck.

Workers at three of France's twelve refineries have voted to go back to work, but it will take a few days to restart operations. The cause of the protests, the country's biggest since 1968, is a pension reform bill that is expected to be passed by parliament by the middle of the week.

French President Nicolas Sarkozy has taken a huge popularity hit, a poll in a French newspaper showed 70% of French are "dissatisfied" with his performance.