Accessibility links
Files Reveal FBI Tracked Wellstone Early; Aided Inquiry Into 2002 Crash : The Two-Way When Sen. Paul Wellstone's plane crashed eight years ago -- 11 days before a vote in what had been a tight Senate race -- FBI agents "immediately responded to the crash site," according to records newly obtained by Minnesota Public Radio. 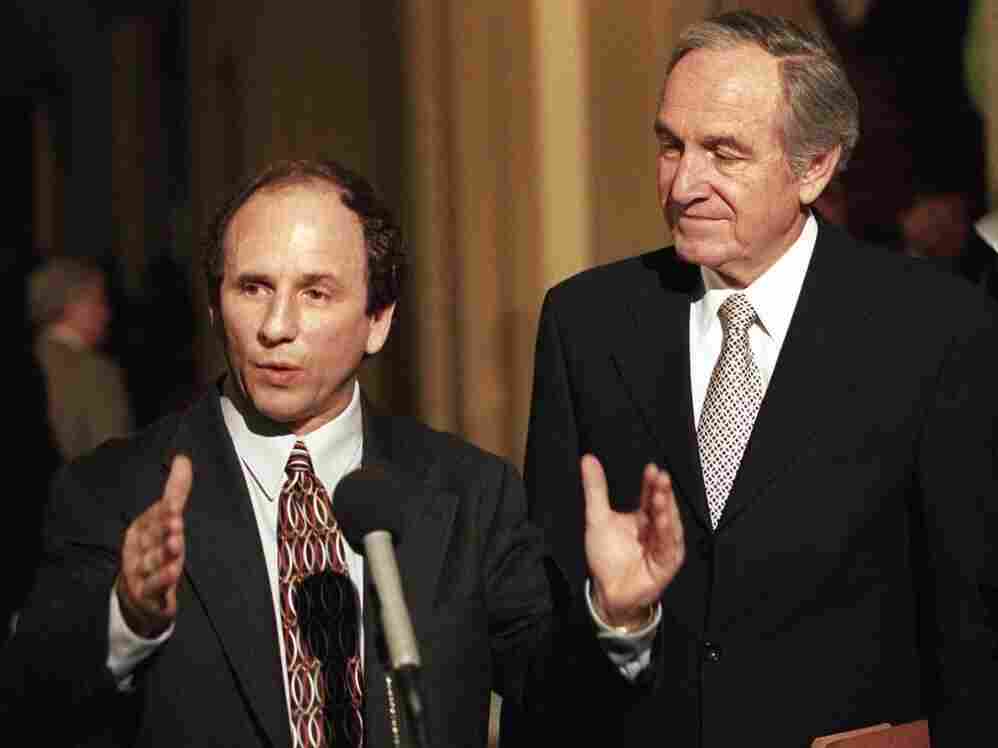 Sen. Paul Wellstone (left) speaks as Sen. Tom Harkin looks on. Newly released documents show that the FBI was initially concerned that the plane crash that killed Wellstone may not have been accidental. MARIO TAMA/AFP hide caption

When Sen. Paul Wellstone's plane crashed eight years ago -- 11 days before a vote in what had been a tight Senate race -- FBI agents "immediately responded to the crash site," according to government records.

The agents spent several days investigating before determining there was no foul play, according to documents obtained by Minnesota Public Radio under the Freedom of Information Act.

The FBI pursued criminal leads in the case, concerned that one of the people who had been making death threats to Wellstone's office might have been involved in the crash that killed the Democratic senator, his wife, Sheila, their daughter Marcia and several staff members.

The documents obtained by Minnesota Public Radio reveal more than 30 years of FBI records on Wellstone, beginning with his arrest at an anti-war rally in 1970 and including death threats that began in 1991, soon after Wellstone defeated Republican Sen. Rudy Boschwitz.

Wellstone's former campaign manager Jeff Blodgett told MPR that he hadn't known about the FBI involvement in the crash-scene investigation. "It's actually heartening to hear that they were extremely thorough in following every lead to make sure it was tied up," he told MPR's Madeleine Baran.

After he opposed the first Gulf War in 1991 -- just days after he took office -- Wellstone began receiving angry calls. MPR reports that at one point, the FBI placed a tap on the senator's office phone, in an attempt to track down the callers making threats against his life.

Before he became a politician, Wellstone was an active protester in civil rights and anti-war demonstrations. He was also a college professor who taught political science. His doctoral dissertation was titled "Black Militants in the Ghetto: Why They Believe in Violence."