Accessibility links
Most (And Least) Corrupt Countries : The Two-Way Somalia, Burma, Afghanistan and Iraq are the most corrupt. Denmark, New Zealand, and Singapore the least. The US, and other countries hit by the financial crisis fell in the rankings.

Most (And Least) Corrupt Countries

Most (And Least) Corrupt Countries 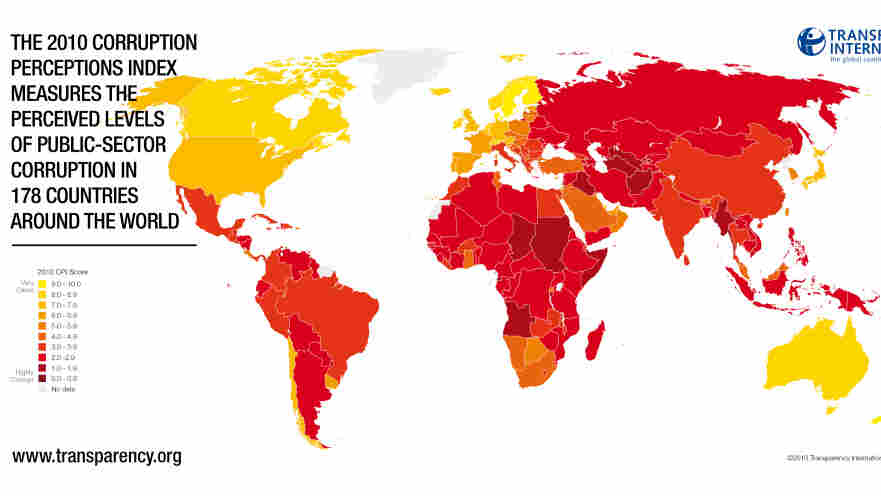 Corruption seems endemic. It follows war and chaos like an unwelcome cousin. Transparency International has just released its annual report ranking corruption across the world.

At the bottom of the list, the most corrupt, are countries hit by warfare and strife, unsurprisingly. Somalia is the worst, followed by Burma, then Afghanistan and Iraq. The least corrupt countires are Denmark, New Zealand, and Singapore, unchanged from last year.

In a press release, the organization said, “Notable among decliners are some of the countries most affected by a financial crisis precipitated by transparency and integrity deficits.”  Greece fell from 71 to 78 and Italy from 63 to 67. The US also fell, from the 19th spot to the 22nd. From Reuters:

Nancy Boswell, president of TI in the United States, said lending practices in the subprime crisis, the disclosure of Bernard Madoff's Ponzi scheme and rows over political funding had all rattled public faith about prevailing ethics in America.

"We're not talking about corruption in the sense of breaking the law," she said. "We're talking about a sense that the system is corrupted by these practices. There's an integrity deficit."

Various financial scandals at state and city level had encouraged the impression that the regulatory oversight was weak and that influence could be bought, she added.

Corruption is something that just becomes ingrained in a society and once it's there it's hard to stop. It becomes a habit of mind, a sense that this is simply how things done. An official pamphlet given to Iraqi refugees who are heading to the States advises them not to bribe police officers. After working in Iraq for years I came home from one trip and had to go to the DMV. I'm waiting in line, as one does, and all I can think is, "Who can I bribe to make this go away?" To address corruption you have to change a society's whole way of thinking about what the cultural norms are, which is not easy, to say the least.