Accessibility links
New Vaccine Raises Hopes Of Polio Eradication : The Two-Way The new vaccine has been shown to be more effective than others. World Health Organization Officials are saying it could help completely eliminate the disease. They're giving it to millions of African children this week. 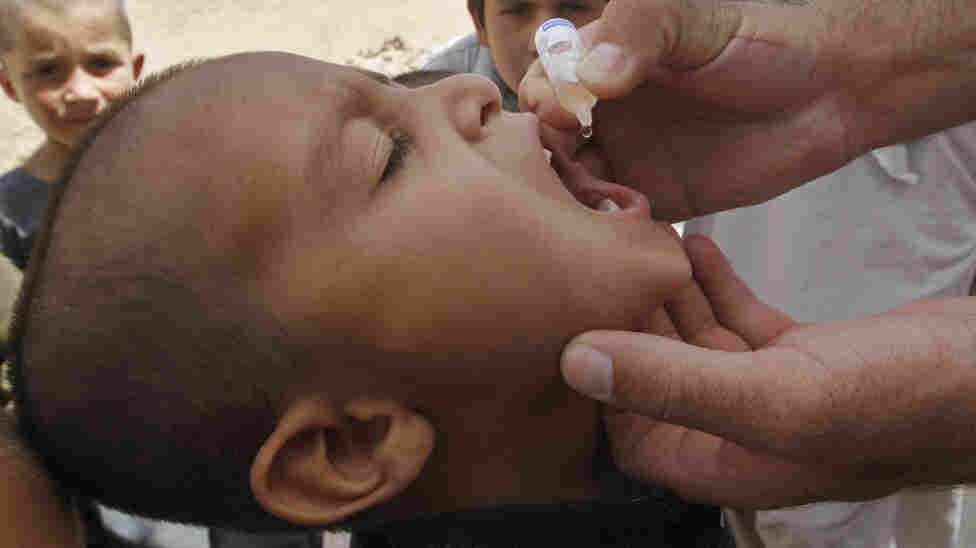 A new polio vaccine is being touted as the tool in possibly eradicating the disease from the planet by the World Health Organization. The vaccine is 30% more effective than the most commonly used vaccine according to a paper published online in the British Journal Lancet. From the BBC:

Dr Roland Sutter, from the WHO and the lead author of the study, told BBC News: "This (new) vaccine could get us over the top and get us to the finish line for eradication.

"The dramatic drop in the number of polio cases in India and Nigeria is attributable to the new vaccine and better coverage during immunization campaigns."

The vaccine has already been used in India, Afghanistan, and Nigeria which have shown dramatic drops in the disease. In India, for example, so far this year there have been just 32 diagnosed cases, in the same time period in 2009, there were 260.

The new vaccine is a bi-valent vaccine, attacking two of the strains of polio. It is going to be immediately deployed across Africa, reports Reuters.

In a briefing after the study was published, WHO spokesman Rod Curtis said some 72 million children in 15 countries across Africa would be vaccinated in immunisation campaigns this week, including 55.7 million who will receive the bivalent vaccine.

"This will raise immunity to both types of polio so the chances of a significant outbreak are largely reduced," he told Reuters in Geneva.

The incidence of polio has dropped 99% in recent decades. In 1998 the disease was endemic in 125 countries and paralyzed more than 350,000 children a year. Now it's endemic in only 4 countries, Nigeria, India, Pakistan and Afghanistan.