Accessibility links
British Columbia Sees Largest Salmon Run In A Century, 34 Million Strong : The Two-Way Sockeye salmon are making their run up the Fraser River in numbers not seen since 1913. More than 34 million salmon are reportedly in the British Columbia river system, befuddling scientists who last year tallied less than 2 million fish. 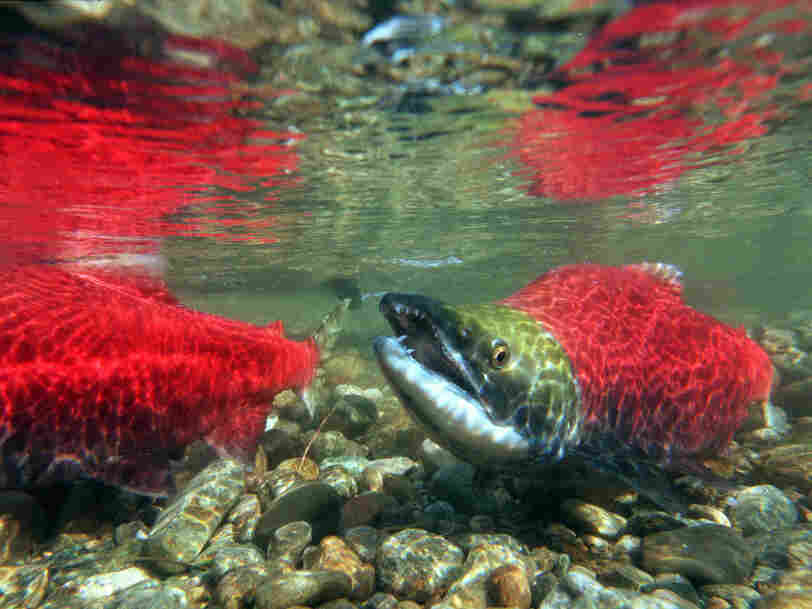 As you can probably tell, this is a file photo of sockeye salmon swimming at the mouth of the Adams River, part of the Fraser River System in British Columbia. GARY STEWART/AP hide caption

Sockeye salmon are making their run up the Fraser River in numbers not seen since 1913. More than 34 million salmon are reportedly in the British Columbia river system, befuddling scientists who last year tallied less than 2 million fish.

The BBC has an interactive report on the run -- and some words of caution from scientists who warn against interpreting the boom of 2010 as a promise that similar numbers of salmon will return in 2011.

The long-term pattern of smaller runs has been blamed on both commercial fish farms and an increase in predators in the sockeyes' migratory path.

Professor Daniel Pauly, a world fisheries authority at the University of British Columbia, says he doesn’t expect this year's massive run to start a new trend.

One theory behind this year's outsize salmon run suggests that ash from the volcanic eruption of Kasatochi in 2008 put nutrients into the Gulf of Alaska -- and that, in turn, put out a smorgasbord of diatoms for the adolescent salmon to eat.

As research scientist Tim Parsons tells the CBC, "So, we get back, in my hypothesis, 34 million salmon — which was totally unpredicted — instead of the 1.5 million salmon of the previous year, which fed on a diet… composed of very small plankton."

After last year's small run, the Canadian government formed a panel to explore the reasons for it. And as the Vancouver Sun reports, the Cohen Commission inquiry has spurred public demonstrations and posturing by those in favor and against fish farming.

If you're the kind of person who'd like to follow fisheries news, you should check out BBC reporter Susan Watts' blog.