Accessibility links
GM And Ford Gain On Honda, Toyota In Latest Consumer Reports Survey : The Two-Way Despite gains by Ford and GM, Honda and Toyota make the most-reliable cars and trucks sold in America, according to Consumer Reports' latest annual survey of drivers. 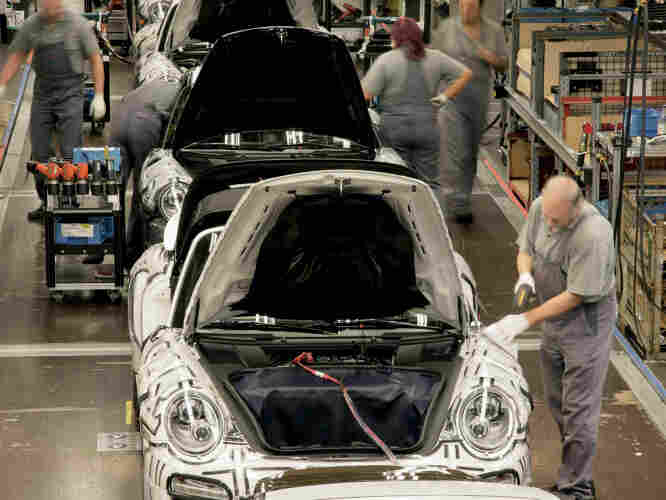 Workers at Porsche's factory in Stuttgart-Zuffenhausen assemble 911 and Boxster models. The Boxster was found to be the most reliable car sold in 2010, according to Consumer Reports. Porsche Cars, N.A. hide caption

Despite gains by Ford and GM, Honda and Toyota make the most-reliable cars and trucks sold in America, according to Consumer Reports' latest annual survey of drivers.

If that sounds strange, given Toyota's well-publicized recalls of the past year, consider this quote from a Bloomberg story on the ratings:

“There’s a difference between actually having problems and having your car recalled,” Jake Fisher, senior automotive engineer at Consumer Reports’ vehicle test center, said in a telephone interview. “While the recalls were widespread, the actual problems people were having associated with those recalls were much smaller.”

Toyota's Scion cars had the fewest problems of any brand in the survey -- although that must be taken in context, as Scion only makes three models.

The luxury brands Acura, by Honda, and Infiniti, a division of Nissan, were in the top five, but Lexus, made by Toyota, fell to ninth.

The ratings held bad news for many European carmakers -- around half the models made by BMW and Mercedes scored below average, the magazine said. And Audi did even worse, with nearly three quarters of its listed models being found to be below average.

Porsche was one bright spot, getting second place behind Scion. Volkswagen also did well, with its Golf and Jetta models being singled out for being at least average or better.

Here's a quick summary of the findings, from CR's web site:

•      Ford continues to be the most reliable American automaker. Ninety percent of Fords, including Lincoln models, have at least average reliability.

•      Chrysler remains the lowest-ranked manufacturer in our survey. We can recommend only one of its vehicles, the four wheel-drive Dodge Ram 1500.

•      While European reliability had been improving, momentum seems to have stalled. All Porsche and Volvo models are rated average or better. But Audi, BMW, and Mercedes-Benz are among the worst automakers overall.

•      The Porsche Boxster has the best predicted reliability in our survey, while the Audi A6 3.0T and Jaguar XF have the worst.

For its evaluations, Consumer Reports received feedback from subscribers on 1.3 million cars' reliability.

The magazine singled out GM brands for their improvement. Some 83 percent of Chevrolet's models were rated above average -- up from 50 percent last year.

And in the overall standings, Cadillac rose seven places from last year's rankings.