Accessibility links
FBI Arrests Man In Alleged Plot To Bomb D.C. Subway : The Two-Way A Virginia man has been arrested for allegedly plotting to stage multiple bombings in Washington, D.C.'s subway system. The FBI says it caught Farooque Ahmed, 34, in a sting operation. 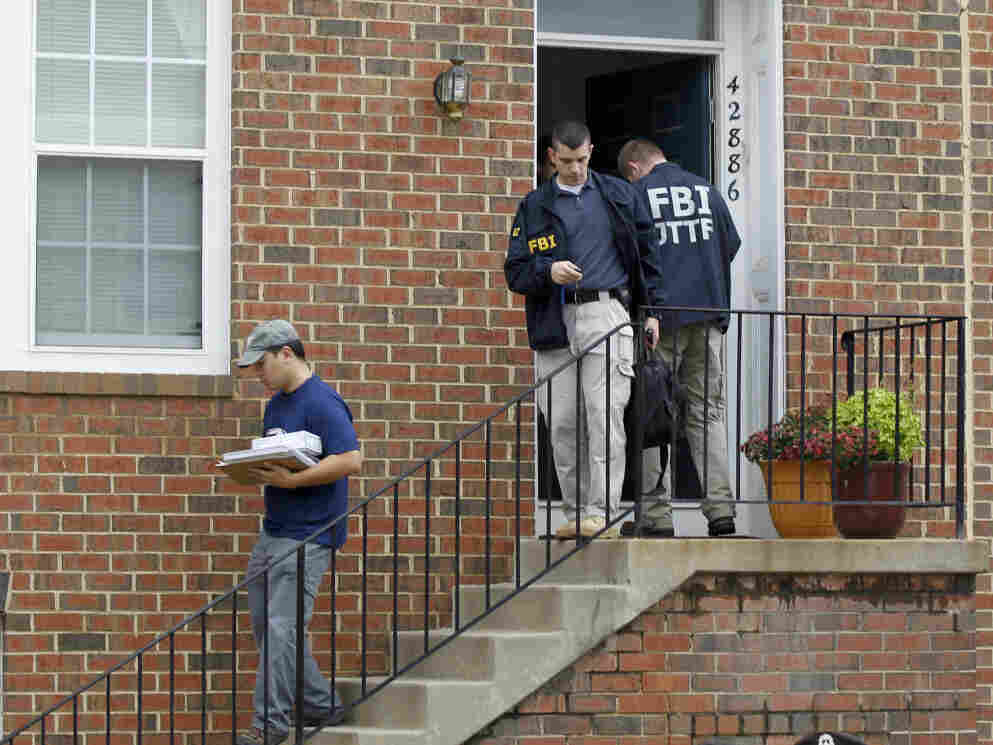 FBI investigators search the home of Farooque Ahmed in Ashburn, Va. Ahmed, a naturalized citizen born in Pakistan, was arrested Wednesday and charged with trying to help people who were posing as al-Qaida operatives planning to bomb subway stations around Washington, D.C., the FBI said. Luis Alvarez/FR596 AP hide caption

A Virginia man has been arrested for allegedly plotting to stage multiple bombings in Washington, D.C.'s subway system. The FBI says it caught Farooque Ahmed, 34, in a sting operation.

According to an AP report, a federal grand jury indicted Ahmed Tuesday on three charges:

He appeared in court Wednesday, after being arrested at home in the morning. The Washington Post reports:

Sporting a full beard and wearing a gray polo shirt and blue jeans, Ahmed shook his head and let out a deep sigh as the charges against him were read. "Yes, yes," Ahmed said, as the judge told him the charges were serious.

Ahmed has not entered a plea in the case; he asked a judge in Virginia to provide him with an attorney.

Agents had reportedly been in contact with Ahmed since April, when undercover operatives working with the FBI introduced themselves to him, saying they were al-Qaeda operatives.

As NPR's Dina Temple-Raston reports, Ahmed allegedly started showing up at meetings every couple of weeks, with videos and diagrams and pictures of potential targets.

The indictment also says that Ahmed suggested using rolling suitcases instead of backpacks for the bombs to attract less attention.

White House press secretary Robert Gibbs says that President Obama was aware of the investigation before Ahmed was arrested, according to the Associated Press. Gibbs also offered assurances that the public was never in danger.

Ahmed is a naturalized American citizen who was born in Pakistan. He evidently drew the attention of the authorities by "seeking to obtain unspecified materials."

The Post spoke with Ahmed's neighbor Shaya Fitzgerald, 39, who lives across the street. She says the suspect has a wife and young son:

Ahmed's wife "wore a full hijab, the whole thing. She seemed relatively young," Fitzgerald said. "He had a full beard. . . . My only impression of him was that he was not that sociable."

If convicted, he could face up to 50 years in prison, according to the AP.