Accessibility links
Game 2: What To Say To Sound Smart About The World Series : The Two-Way Once again NPR's Mike Pesca comes to the rescue with what to say about last night's debacle of a ball game. As a bonus, he throws in the best baseball cliche.

Game 2: What To Say To Sound Smart About The World Series

Game 2: What To Say To Sound Smart About The World Series 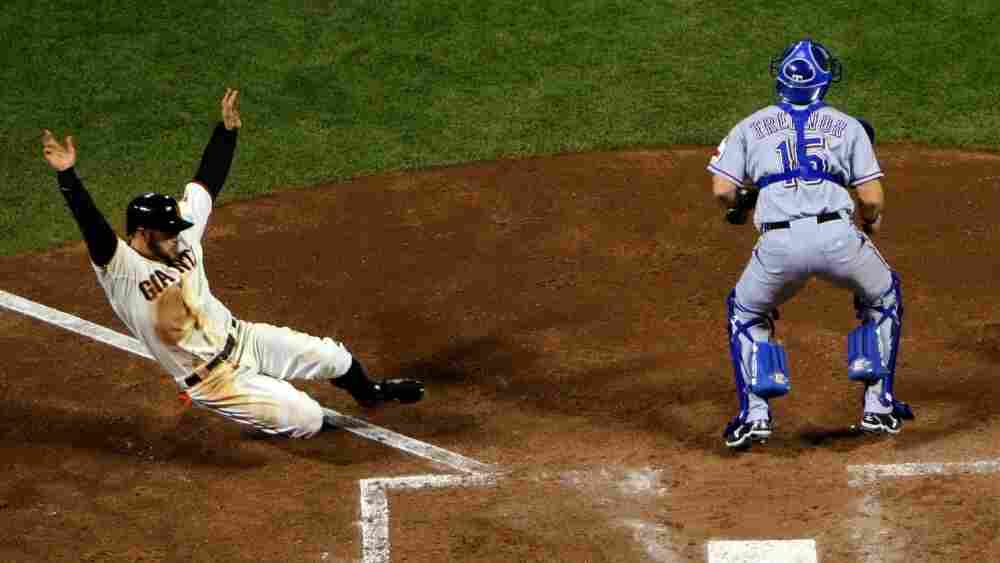 Well, yesterday's lines worked for me at the local ESPN Sportszone last night, so I called Mike Pesca again this morning for more things that will make me sound like I know what I'm talking about if someone brings up baseball. Out of the goodness of my heart, I'll share them with you.

Well, the last 7 teams with 2 games to none leads in the Worlds Series have gone on to win the World Series. The master list of whenever a team is up 2-0 in a 7 game series, indicates that baseball teams have a .814 winning percentage in all series when up 2-0. In fact, the chart doesn’t include last year's basketball playoffs in which all 9 teams that went up 2-0 in a series won the series. So give the Giants an even better than 81.4% of hoisting the championship trophy.

There were only 2 times this season where the Giants combined for 20 runs in consecutive games. After those 2 nights of prodigiousness (real word) they lost the next game. The reason for one of those losses is Steven Strasburg. In early July San Francisco swept a series with the Brewers averaging 9 runs a game. Then they went to Washington where the young Nats pitcher unleashed a one man rally to restore common sense on the suddenly hot Giants bats. 8 strike-outs in 6 innings proved the old baseball adage: momentum is only as good as the next day’s starter. That by the way is the best cliché in baseball. It’s a) true b) well phrased c) not obvious. All the makings of a good cliché. A bad cliché? Absence makes the heart grow fonder. Also the uptight young woman in a pencil skirt who puts her corporate career over love through improbable circumstance finds herself with a Matthew McConaughey-type river rafting guide stranded along the Ucayali River with only 3 days to get to her sisters wedding in Machu Pichu. Christopher Walken plays McConaughey’s dad and, in uncredited cameo, Will Ferrell is a former government operative who’s gone native.

Ron Washington’s managerial decisions haven’t lost his team games; they’ve just denied the Rangers the best chances to win. In game 1 Vladimir Gurerro plays right field, or at least is assigned to play right field, the balls seemed to play him. In game 2 Vlad sits and the Rangers offense suffers for it. So maybe that was a “no win” situation. But Washington’s handling of his bullpen in last night’s eighth inning was atrocious. Others can provide the details; suffice it to say that 4 pitchers gave up 7 runs throwing 55 pitches over 37 minutes! (I timed it on TiVo) Ugghh.