Accessibility links
Yemen Puts Anwar Al-Awlaki On Trial : The Two-Way Al-Awlaki, a US citizen, is suspected of involvement not only with the package nbombs, but with the attempted bombings of an airliner last Christmas, and in Times Square. He's also accused of being in contact with the shooter at Ft. Hood, TX. 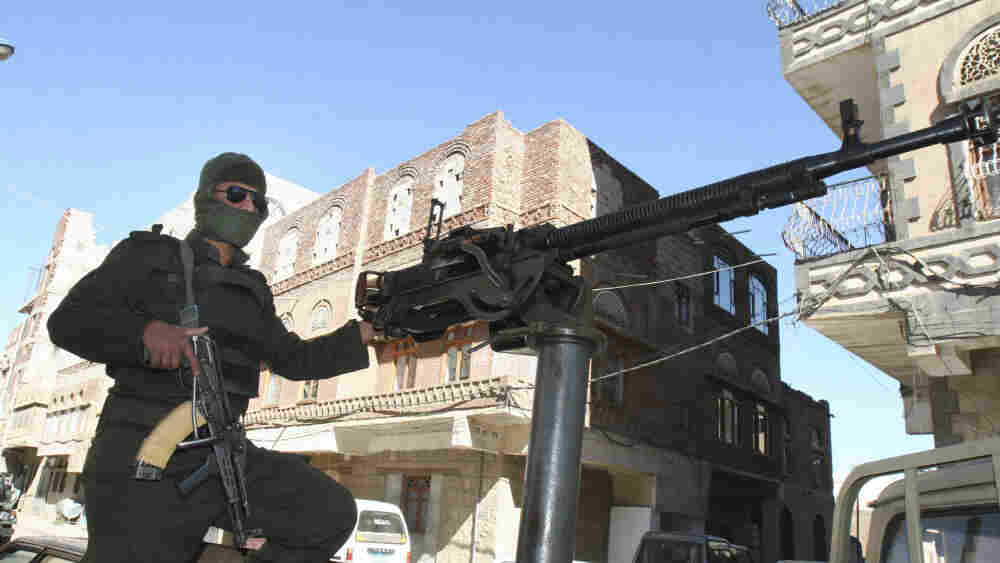 A Yemeni policeman takes position outside the state security court in San'a,Yemen, Tuesday, Nov. 2,2010, where Anwar al-Awlaki was put on trial in absentia. Anonymous/AP hide caption

An American born Islamic cleric has been put on trial in Yemen in absentia. He's accused of being a member of Al Qaida and plotting to kill westerners. The Yemeni government also launched a major operation in two rural provinces aimed at arresting him.

Anwar al-Awlaki was born in New Mexico and is a citizen of both Yemen and the U.S. His fiery English language sermons are aimed at Muslims living in the West, encouraging them to take up Al Qaida's ideology. American investigators say emails link him to the shootings last year at Ft. Hood in Texas. He's also been linked to the Christmas day bombing attempt last year, and the bomber in Times Square. He's also thought to be involved in the package bomb plot.

This past spring he was put on a capture or kill list by President Obama, the first American to be placed on it.

Awlaki is believed to be living under tribal protection in a mountainous region of Yemen. The Yemeni charges against him were revealed at the trial of another man, 19 year old, Hisham Assem reports the AP.

The prosecutor in Tuesday's trial said Assem, a guard at the French engineering firm SPIE, had acknowledged that he received Internet messages from al-Awlaki inciting him to kill foreigners with whom he was working.

Assem, who appeared at Tuesday's hearing wearing a blue prison overall, told interrogators that al-Awlaki convinced him that foreigners are "occupiers," and sent him audiotapes with sermons justifying the killing of foreigners when he hesitated, according to the prosecutor.

On the date of the attack at SPIE, Assem followed a French manager and shot him dead in his office, then looked for other foreigners to kill, al-Saneaa said. Assem also shot at a British man, wounding him in the foot, the prosecutor added.

Assem denied the charges, saying he was tortured into confessing. Yemeni authorities say that if they do capture Awlaki, he will be tried in Yemeni courts as a citizen of Yemen.