Accessibility links
George Bush Says Kanye West's Attack Was Low Point Of His Presidency : The Two-Way Former President George W. Bush says that Kanye West's insinuation that he is a racist, made in the aftermath of Hurricane Katrina, still stings today -- and that the episode was the "all-time low" point of his presidency. 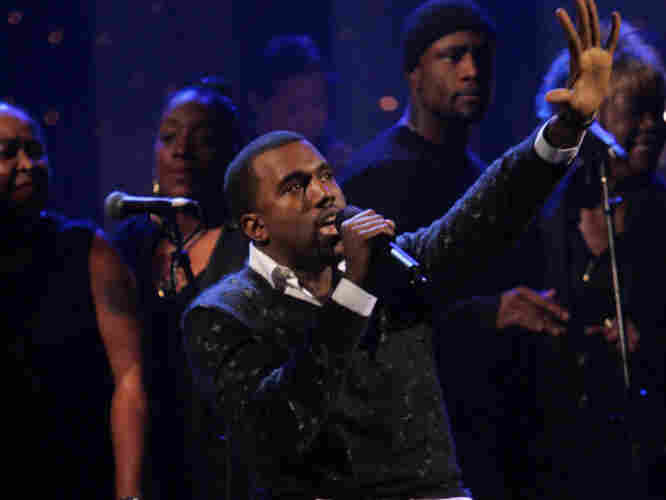 The night he got on President Bush's bad side, Kanye West performed on Shelter from the Storm: A Concert for the Gulf Coast. MONTY BRINTON/JOINT NETWORK GULF COAST BENEFIT, INC. hide caption

Former President George W. Bush says that Kanye West's insinuation that he is a racist, made in the aftermath of Hurricane Katrina, still stings today -- and that the episode was the "all-time low" point of his presidency.

Bush's long-delayed reaction to West's ad-libbed comment that "George Bush doesn’t care about black people," made during a live TV benefit show for hurricane survivors, is from an interview the former president taped with Matt Lauer of NBC.

Here's the exchange, from an early transcript the network released, as quoted by Ken Tucker of Entertainment Weekly:

Lauer quotes from Bush’s new book: “Five years later I can barely write those words without feeling disgust.” Lauer adds, “You go on: ‘I faced a lot of criticism as president. I didn’t like hearing people claim that I lied about Iraq’s weapons of mass destruction or cut taxes to benefit the rich. But the suggestion that I was racist because of the response to Katrina represented an all-time low.’

Lauer: “You say you told Laura at the time it was the worst moment of your presidency?”

Bush: “Yes. My record was strong, I felt, when it came to race relations and giving people a chance. And it was a disgusting moment.”

Lauer: “I wonder if some people are going to read that, now that you’ve written it, and they might give you some heat for that. And the reason is this — “

Lauer: “Well, here’s the reason. You’re not saying that the worst moment in your presidency was watching the misery in Louisiana. You’re saying it was when someone insulted you because of that.”

Bush: “No, and I also make it clear that the misery in Louisiana affected me deeply as well. There’s a lot of tough moments in the book. And it was a disgusting moment, pure and simple.”

Before we proceed, allow me to ask: What is it about a midterm election that makes former presidents start talking about rappers? First there's the Bill Clinton-Lil' Wayne story, and now this.

While it's not clear if Lil' Wayne has an opinion about Clinton's remark that the oft-incarcerated rapper is a smart guy who should try to stay out of trouble, Kanye West has -- believe it or not -- offered his opinion on Bush's comments to Lauer.

As reported by Rap Radar, West was speaking to Houston deejay Devi Dev of Houston's 97.9 The Box when he was asked what he thought about Bush's sharp words. Here's what he said:

For me, it was a lack of compassion of, you know, cutting someone off in their moment. But nonetheless, you know, I think we’re all quick to pull, like, a race card in America.

And now I’m more open. And the poetic justice that I feel, to have went through the same thing that he went [through]. And now I really more connect with him, on… just a humanitarian level. Because that next morning, when he felt that -- I felt that, too."

Back to the Katrina fallout: Reuters quotes another portion of the transcript, in which Bush discusses his words of praise for emergency response chief Michael Brown. When he said, "Brownie, you're doing a heck of a job,'' Bush explains, he was trying to keep up morale.

"I never imagined those words would become an infamous entry in the political lexicon,'' he said.