Accessibility links
Ex-Transit Officer Given 2-Year Prison Term : The Two-Way The shooting and trial have already caused two riots in the bay area. 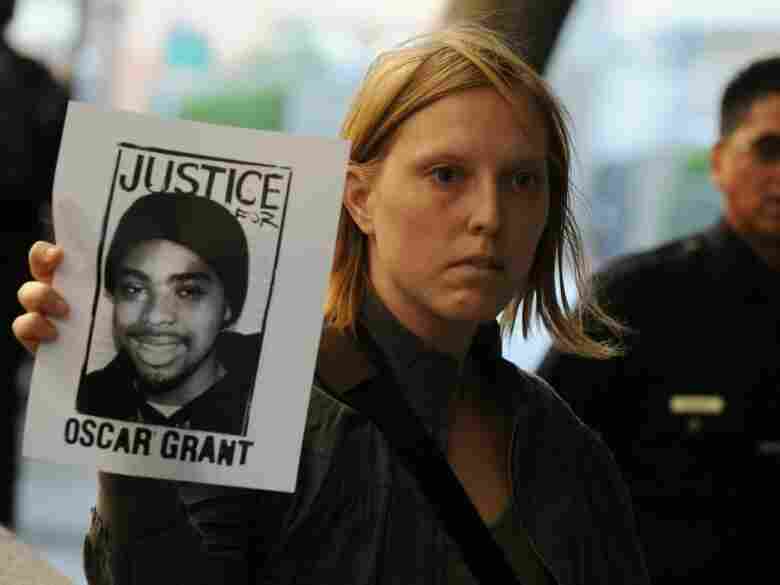 A Los Angeles judge sentenced a former transit officer convicted of shooting an unarmed man on an Oakland train platform to two years in prison.

Two years was the minimum sentence that Johannes Mehserle, who worked for the Bay Area Rapid Transit, could have received.

NPR's Richard Gonzalez says Mehserle spoke to the court for about ten minutes before the sentencing. He also apologized to the victim's family.

Right after the shooting, videos recorded by several witnesses showed Mehserle shooting a round into the back of Oscar Grant.

Mehserle is white and Grant is black, so the incident quickly became racially charged and led to rioting in Oakland and again when a jury found Mehserle guilty of involuntary manslaughter, but not of murder.

After the sentencing was announced, Grant's mother, Wanda Johnson, emerged from the courtroom muttering, "Nothing, he got nothing!" The family declined to talk to reporters.

In downtown Oakland, where a memorial was being set up for his grandson, Oscar Grant Sr., 65, said, “It’s a bad decision. No time can bring [Oscar] back. But [Mehserle] should have served some time. Otherwise, they’re telling the public, though he went to trial, a policeman can shoot someone and go free. These guys have a license to kill.”

The verdict meant that jurors concluded that Mehserle, 28, did not intend to kill Grant, 22, when he shot him in the back at Fruitvale Station, but acted negligently and took his life unlawfully.

The Chronicle quotes Judge Robert Perry as saying he believed Mehserle, who testified that during the arrest, he thought he had reached for a Taser and not his gun.