Accessibility links
'Mystery Missile' May Have Been A Jet : The Two-Way It sure looked like something big blasted into the sky off the southern California coast on Monday, but some experts say it could have just been an optical illusion.

'Mystery Missile' May Have Been A Jet

'Mystery Missile' May Have Been A Jet 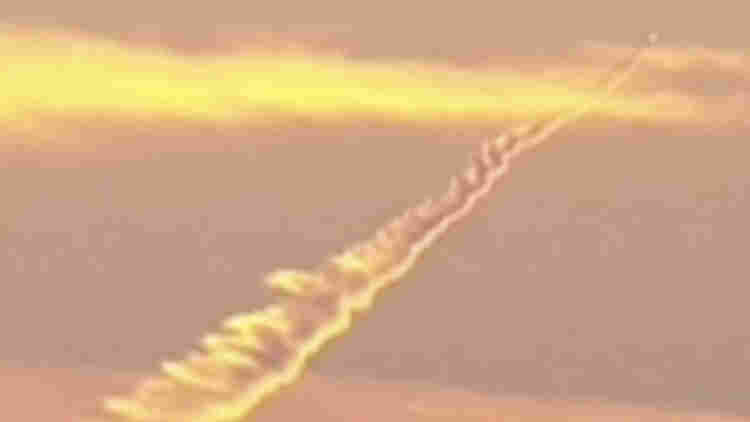 What's it look like to you? Anonymous/KCSB/KCAL hide caption

Before we turn to the really serious stuff, an update on the "mystery missile" story from California.

When we last checked on this odd tale, no one -- including the military folks who monitor the airspace above the U.S. -- seemed to know just what was seen off the coast near Los Angeles Monday evening. But it sure looked like a missile had blasted into the sky.

Now, though, there's talk that it might have been something as simple as the exhaust from a jet. As ContrailScience.com writes, from some angles jet contrails can look like missile trails. And it's got photos to prove the point. (H/T Fox News.)

Still, as the Los Angeles Times reports, some experts who have watched video of the event say they're sure this wasn't just a passenger jet heading off toward the horizon:

"It can't belong to anyone but the military," said Marco Caceres, an analyst with Teal Group Corp., a Fairfax, Va.-based aerospace research firm. The appearance of such a massive rocket contrail near military bases that are known for regularly testing missiles is unlikely to be a coincidence, Caceres said.

NPR's Tom Gjelten reported this morning that the Pentagon says "nothing leads the Defense Department to believe that a missile launch occurred, even inadvertently":

Update at 4:05 p.m. ET: We've started a new post because some Internet sleuths say they've figured out which flight likely caused the contrail and that there's a web cam we all can watch that might show it happen again.

Update at 2:50 p.m. ET: Now the Pentagon is saying the trail was most likely created by an airplane. And KCBS-TV in Los Angeles has filed a new report.