Accessibility links
Alaska Vote Count: Murkowski Got 98% Of Initial Write-Ins : The Two-Way It's going to take about five days to count the 90,000 ballots. But after the first day and with 20% of them tabulated, the senator was getting the vast majority of the votes. 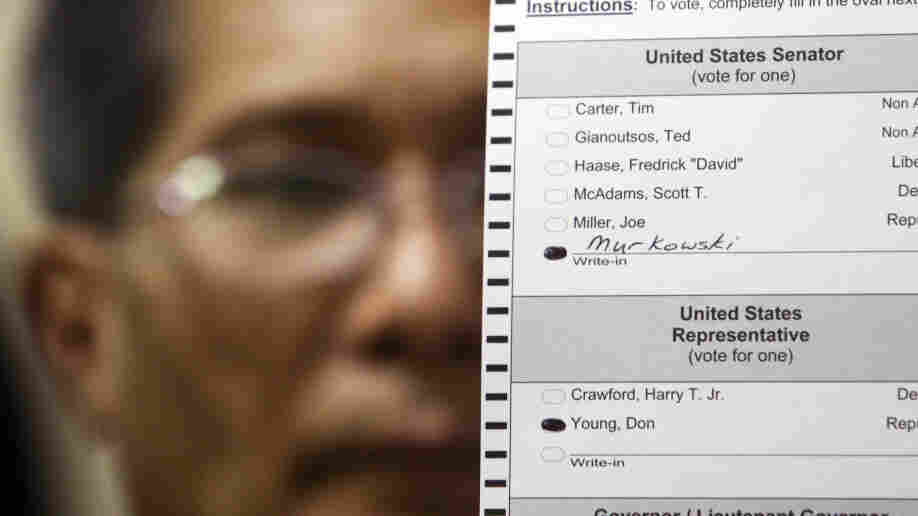 The newspaper adds that, "elections workers opened the write-in ballots for almost 20 percent of the precincts in Alaska on Wednesday. The count of more than 90,000 write-ins will continue today and is expected to last five days."

In case you haven't been following the news from up north:

Murkowski, a Republican, lost the GOP primary to Tea Party favorite Joe Miller. She then mounted a write-in campaign, and 40% of the votes cast were write-ins (to 36% for Miller and 23% for Democrat Scott McAdams).

Whatever happens will not affect the Democratic-Republican breakdown in the Senate. Murkowski has said she would continue to "caucus" with Republicans. So, Democrats will have 53 votes (that includes two independents who caucus with them) and Republicans will have 47.

Frank's been following the Alaska news over at It's All Politics.

Murkowski's 98% of the write-ins includes the ballots that Miller's campaign has challenged on spelling and other grounds. While the state has decided to include those in Murkowski's total, they're also keeping those ballots segregated. In theory, they could be taken away from her again if Miller succeeds in a court challenge he's made.