Accessibility links
From Liberia: Women Who Pushed For Peace Face New Challenges : The Two-Way Their movement is at a crossroads. It's hard to get younger women involved. But the problems of sexual- and gender-based violence against them are serious.

From Liberia: Women Who Pushed For Peace Face New Challenges

From Liberia: Women Who Pushed For Peace Face New Challenges

NPR's Jordana Hochman is traveling in Liberia on Gatekeeper Editors trip organized by the International Reporting Project. This is her third dispatch. The others are here and here:

The women of Liberia helped end its civil war, and this week, I got to meet some of them.

After years of fighting, market women began praying for peace and organizing nonviolent demonstrations. With support from the Women in Peacekeeping Network (WIPNET), they eventually forced a meeting with then-President Charles Taylor (now on trial for war crimes) and got him to agree to attend peace talks in Ghana. The women monitored the talks and to make sure the warring sides negotiated a ceasefire. 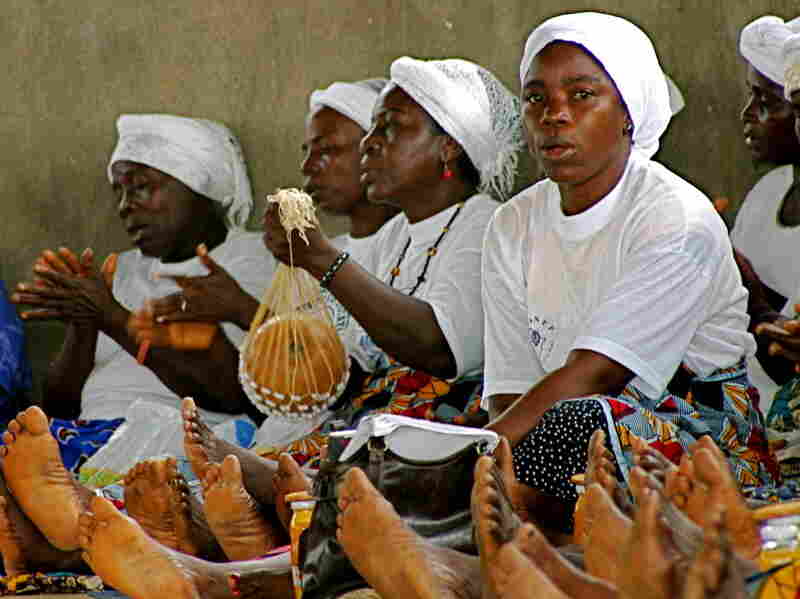 It took seven months, but they reached an agreement in August 2003. The women stayed organized, and they helped elect Africa's first female president, Ellen Johnson Sirleaf.

When they want to come together for discussions and decisions, the women meet in spaces they call peace huts. There's a large one in Monrovia, and that's where we joined them.

During the war protests, the market women wore white head wraps, white t-shirts, and brightly patterned skirts -- and that's what they wore when we met them. They sang defiantly, proclaimed their faith in God, and counted their accomplishments.

But they acknowledged that their movement is at a crossroads. With the war behind them, with a supportive president, what's next?

Older women make up the majority of the movement, and it's hard to get young women interested. Young women are concerned with education, but there are many obstacles in getting them to school and keeping them there. One of those obstacles is sexual- and gender-based violence, which have affected many of the market women too.

One told me she lost her husband and her five children during the war, and on top of that, she was gang raped by five men.

Today's young women are having similar experiences, even though the war has been over for seven years. Rape is the most frequently reported crime in Liberia. Last year 90 percent of rape victims were girls under the age of 18. We met some of those young girls at a clinic and rehabilitation school the same day. The programs are run by a non-profit called THINK (Touching Humanity in Need of Kindness).

Girls at the school stay for nine months, and they receive vocational training -- they can learn about sewing, baking, food preservation or cosmetology. Seventeen-year-old Rosaline was learning to apply makeup, to braid hair, perm it and weave it. She hopes to have a business one day.

Girls at the clinic and safe house stay for as long as they need to recover. I met one 16-year-old who had been at the safe house for four months. Her 20-year-old sister was there too. When she leaves, she says she want to become a "gospel singer for Liberia." She asked to sing for me, and with a smile on her face, she did.