Accessibility links
Climate Change Debate Within Kiribati : The Two-Way The remote island chain of Kiribati is often portrayed as being on the forefront of climate change, but even the people there don't agree whether it's real or not. 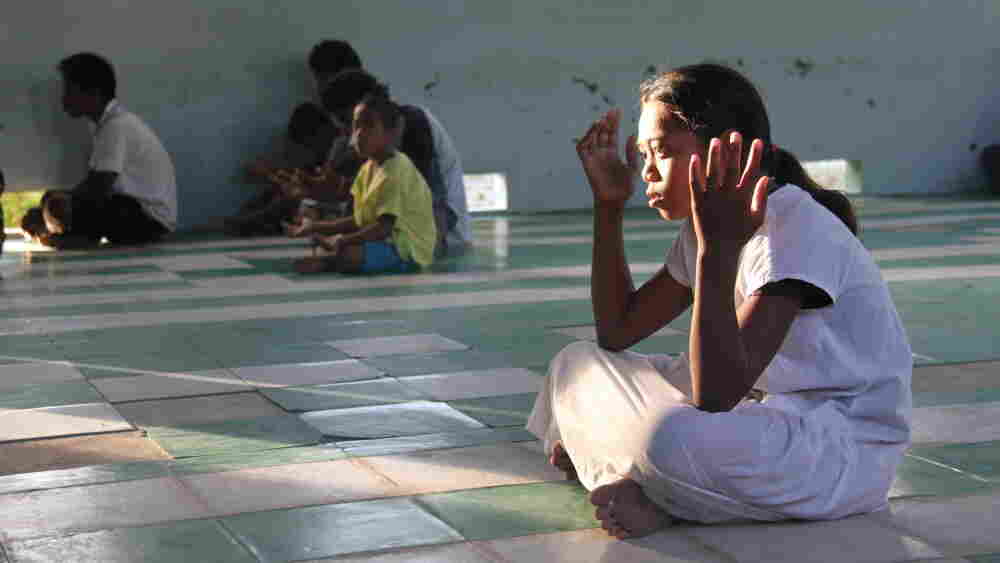 A young girl prays at a church on Abaiang, one of Kiribati's outer islands. Brian Reed hide caption

During international negotiations, Kiribati’s delegates portray their country as being on the front lines of climate change, saying that within the century, the atolls could be contending with dangerously high seas. But there’s actually some disagreement about that within Kiribati itself. Take, for example, these two statements:

Climate change is an all natural phenomenon. You can’t really do much about that, unless you can talk to God and negotiate with God….He made a promise to Noah that he will never again destroy this earth with flood.

The first is from a speech last week by Kiribati President Anote Tong. The second was said to me by Harry Tong, the president’s older brother.

Besides his religious beliefs, Harry Tong – who’s a doctor – also has political motivations to disagree with his brother. When the two ran against each other for president in 2003, Anote Tong won.

Still, these famous rivals represent both sides of an interesting and emotional debate here, one that often takes place within families. The vast majority of I-Kiribati are practicing Christians (of the more than 90,000 people counted in the last census, only 23 said they did not belong to any religious group), and a number of them hold fast to the belief that God won’t let any great harm come to the earth.

Last night, I visited a married couple that fervently believes this, despite the fact that their daughter, who’s studying in Australia, constantly tries to convince them otherwise. She calls home twice a month, and every time they talk she brings up the threat of climate change and sea level rise.

“We still don’t believe in it,” her father said. “It’s God’s promise to Noah that there’s no more flooding to the world.”

Of course there are many Christians here who do believe in climate change, and a number of church leaders are working to fine-tune this idea of the so-called rainbow promise: that in the Bible, after the great flood, God assures Noah that he will not send another. They argue that in the case of climate change, it wouldn’t be God sending the second flood, but man.

And while I have spoken with people who seem to be changing their minds, the convictions persist.

“I believe that creation can be upset by man up to a point. And while man is upsetting the planet, we can be affected,” said former president Teburoro Tito, now a member of Parliament. “But I’m sure there must be some other forces making sure the people are safe, because people belong to God, and God is not so silly to allow people to perish just like that.”