Accessibility links
Astronomers Discover Alien Planet In Our Milky Way : The Two-Way The planet and its star are left over from the time, about nine billion years ago, when the Milky Way swallowed up a nearby galaxy. 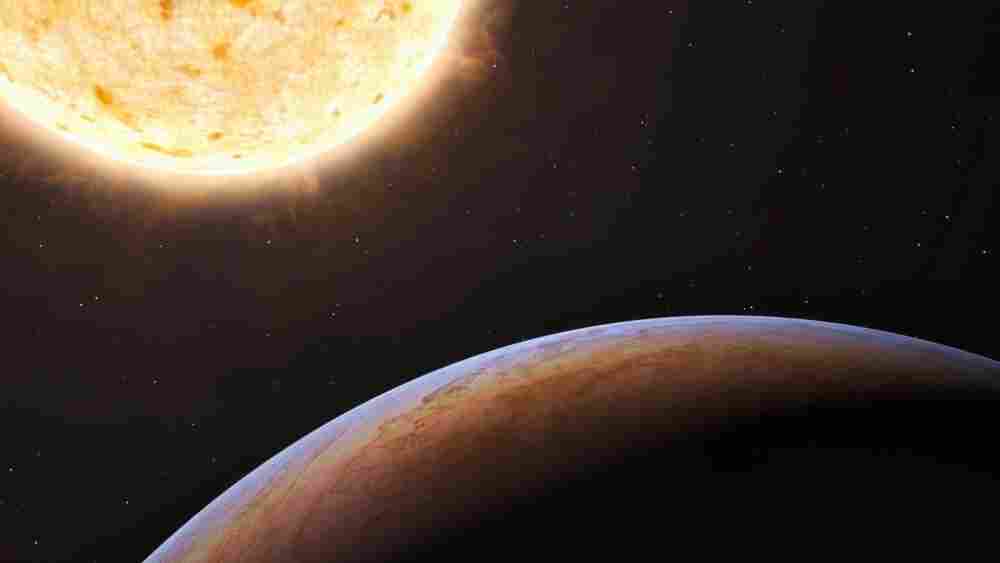 This artist s impression shows HIP 13044 b, an exoplanet orbiting a star that entered our galaxy, the Milky Way, from another galaxy.  Getty hide caption

We've talked about colliding galaxies on this blog before. But this piece of science news today is a little weirder: The journal Science reports that astronomers have found the first extragalactic exoplanet in our Milkyway.

In simplistic terms: Some six to nine billion years ago, the Milky Way swallowed up a dwarf galaxy and this planet and its star called HIP 13044 are what's left over.

The scientists suspected the star and planet were from a different galaxy because of its odd orbit.

Wired explains all the weirdness surrounding this find:

The discovery, notes planet hunter Scott Gaudi of Ohio State University in Columbus, “is doubly weird: It is a weird planet around a weird star.” The star is unusual because it has the lowest abundance of metals — about 1 percent of the sun’s — of any star known to have a planet. (In astronomical parlance, a metal refers to any element heavier than helium.) The vast majority of the roughly 500 extrasolar planets known are found around stars with a much higher metal abundance, and the leading theory of planet formation suggests that stars with high metal contents are those that form giant, Jupiter-like planets.

Also unusual is that HIP 13044 is old enough to have exhausted its supply of hydrogen fuel and passed through the red giant phase of evolution, in which it mushroomed in size. Since then the star contracted to a diameter about seven times that of the sun and is now burning helium at its core. A star in this phase of evolution, known as the red horizontal branch, has never before been found to have a planet.

The BBC explains why this matters:

Dr Robert Massey of the UK's Royal Astronomical Society said the paper provided the first "hard evidence" of a planet of extragalactic origin.

"There's every reason to believe that planets are really quite widespread throughout the Universe, not just in our own galaxy, the Milky Way, but also in the thousands of millions of others there are," he said, "but this is the first time we've got hard evidence of that."

The Australian Broadcasting Corporation reports that the planet could hold some insights into our own solar system. The planet, orbiting a star that's in its last throes, could teach us about the fate our sun, which is also expected to become a red giant in about five billion years. Scientists say it could also teach us about the interaction our galaxy could have with our neighbors:

[Dr Fred Watson from the Australian Astronomical Observatory] says because the planetary system is part of a galaxy that formed at about the same time as the Milky Way, and has since been consumed by our galaxy, it provides another insight into our solar system's future.

"That's because our galaxy will collide with Andromeda in 3 to 5 billion years time."