Accessibility links
'Worst Act Of Aggression Against South Korea' Since '50s : The Two-Way The shells fired by the North fell on an island where civilians live -- a sharp escalation in the long-simmering tensions between the two sides.

'Worst Act Of Aggression Against South Korea' Since '50s

'Worst Act Of Aggression Against South Korea' Since '50s 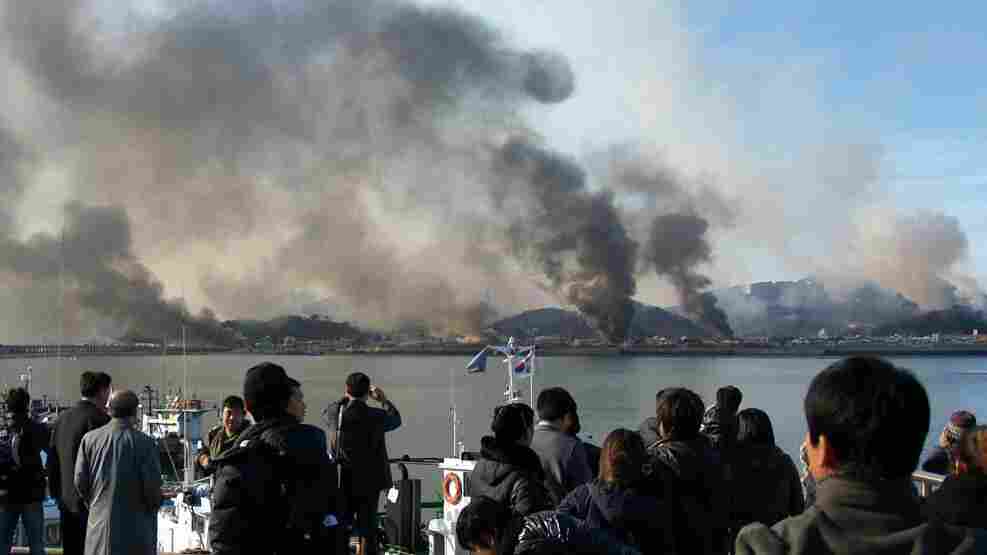 Smoke rises from Yeonpyeong Island in the disputed waters of the Yellow Sea earlier today after artillery shells fired from North Korea fell on the area. STR/AFP/Getty Images hide caption

We start the day with more about the unsettling news that "North Korea (has) fired at least 200 rounds of artillery at a South Korean island near the countries' disputed western sea border."

Two South Korean marines were killed and more than a dozen people injured in today's incident.

On Morning Edition earlier, Dongseo University international studies professor Brian Myers spoke with co-host Steve Inskeep from Seoul. As Myers said, "this is the first time since the Korean War that we've had an attack on civilian territory with artillery shells. So, this is really ... the worst act of aggression against South Korea that we've seen since the end of the Korean War." (Myers was referring to the end of open warfare, of course, since the conflict between the North and South has never officially ended.)

Why would North Korea strike out this way? "The North Korean regime has been making threatening noises toward ... this conservative administration of (South Korean) President Lee Myung-bak ever since he took office in 2008," Myers said. In recent weeks, though, relations appeared to improve. So it's something of a mystery why this happened today.

You can listen to Steve's conversation with Myers here:

As for the clash and current tensions, the shelling from the North followed some military training exercises that the South had been conducting in the area -- exercises which included some artillery fire that the South says was not directed toward the North. South Korea's Yonhap News reports that:

"The North's bombardment on the South's Yeonpyeong Island, which lies just south of the tense Yellow Sea border between the two Koreas, came amid fresh tensions over Pyongyang's claim of having a new uranium enrichment facility and just two months after power transition in North Korea became apparent with the debut of Kim Jong-un, the youngest son of the country's top leader Kim Jong-il.

"Some see Pyongyang's moves as a politically calculated strategy to consolidate power around the junior Kim as he prepares to take over the regime.

"South Korea immediately returned fire and lobbed more than 80 shells toward North Korean artillery positions on the west coast and sent fighter jets to the island. All of the country's troops were placed on maximum alert, officials said."

The BBC writes that most of the shells fired by the North hit a South Korean military base on the island. But the AP adds that "mountain fires were spreading ... and residents had fled to bomb shelters in nearby villages."

"I thought I would die,'' Lee Chun-ok, 54, told the AP after being evacuated to the port city of Incheon, west of Seoul. "I was really, really terrified, and I'm still terrified.''