Accessibility links
Panera Opens Second 'Pay What You Can' Shop : The Two-Way The nonprofit cafe in Dearborn, Mich., lets those who can't afford to pay the "suggested" price give what they can. Others can give more.

Panera Opens Second 'Pay What You Can' Shop

Panera Opens Second 'Pay What You Can' Shop

Just in time for the giving season, Panera Bread Co. is following up on an interesting social experiment by opening its second shop where customers don't have to pay the suggested prices for sandwiches and other food -- rather, they're allowed to pay what they can.

This one's in Dearborn, Mich., right in the heart of one of the hardest-hit (economically) parts of the nation. The first such Panera Bread Foundation nonprofit cafe is in Clayton, Mo. 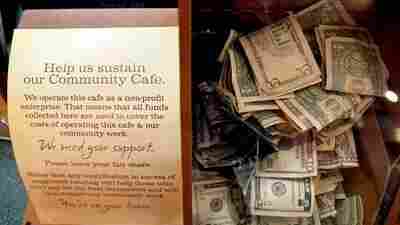 According to The Detroit News, Panera learned from the Clayton shop that "20 percent of patrons give more than the suggested donation, 60 percent give about the same amount and 20 percent leave less." There are no cash registers; just donation boxes.

In a statement, Panera Bread co-founder Ron Shaich says "the vision for the Panera Cares Cafe was to use Panera's unique restaurant skills to address real societal needs and make a direct impact in communities" by making its food available to those who otherwise might not be able to afford it. And, of course, those who can afford to pay more can give a little extra to help out those in need.

Now, here's a question for the group: What would you do?