Accessibility links
Was April 11, 1954, Really 'The Most Boring Day'? : The Two-Way Nobody famous died. Nobody famous was born. Nothing much happened, says the creator of a new search engine.

But the claim by a University of Cambridge-trained computer scientist that his supposedly super computer program has determined that the second Sunday in April 1954 was the most boring day since the dawn of the 20th Century is getting some attention on the Web. 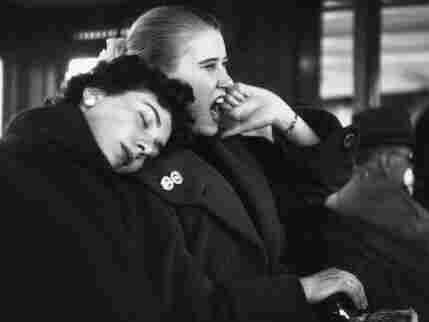 Even New Year's Day in '54 looks dull. These women were waiting for a ferry in Liverpool. Bert Hardy/Hulton Archive hide caption

Today, William Tunstall-Pedoe told All Things Considered co-host Robert Siegel that after a computer analysis of more than 300 million facts (done by a search engine called True Knowledge that he's invented), it seemed clear that ... well ... nothing great happened on 4-11-54.

Robert told Tunstall-Pedoe that this must be a "completely unsupportable conclusion."

But Tunstall-Pedoe insisted that while on most days, "lots of famous people are born, famous people die, there are events happening ... this particular day was extremely notable for having almost nothing happen":

Now, we're not Cambridge-trained computer geniuses. But we do have to admit that searches of other databases, such as Historyorb.com and the Library of Congress' website don't turn up much of interest for the day in question.

So come on, folks, tell us of something you know that happened that day. Or nominate another day that was more boring (and we'll save some of you the trouble by saying it first: "the day I read this blog post").