Accessibility links
A Kiribati Village Slowly Succumbs To The Sea Around It : The Two-Way The village of Tebunginako in the island-nation of Kiribati is succumbing to the sea that surrounds it. Is this a sign of climate change, or something the villagers have brought upon themselves?

A Kiribati Village Slowly Succumbs To The Sea Around It

A Kiribati Village Slowly Succumbs To The Sea Around It

Coconuts have gotten smaller. The well water tastes salty. Rain doesn’t come when it’s supposed to. Fish are fewer and farther out from the shore.

When you ask people in Kiribati if they’re experiencing effects of the earth getting hotter and the sea getting higher, these are the things they mention. In fact, many people here will talk about a specific tree they used to climb when they were young, or a piece of beach they used to play on, that’s now dead, or eroded or washed out to sea.

And then there’s the village of Tebunginako – which has all but disappeared.

I visited Tebunginako recently, on the island of Abaiang. It’s a bleak place. There are dead coconut trees everywhere: tall, headless pillars, which make it feel like an ancient ruin, the site of some lost civilization. 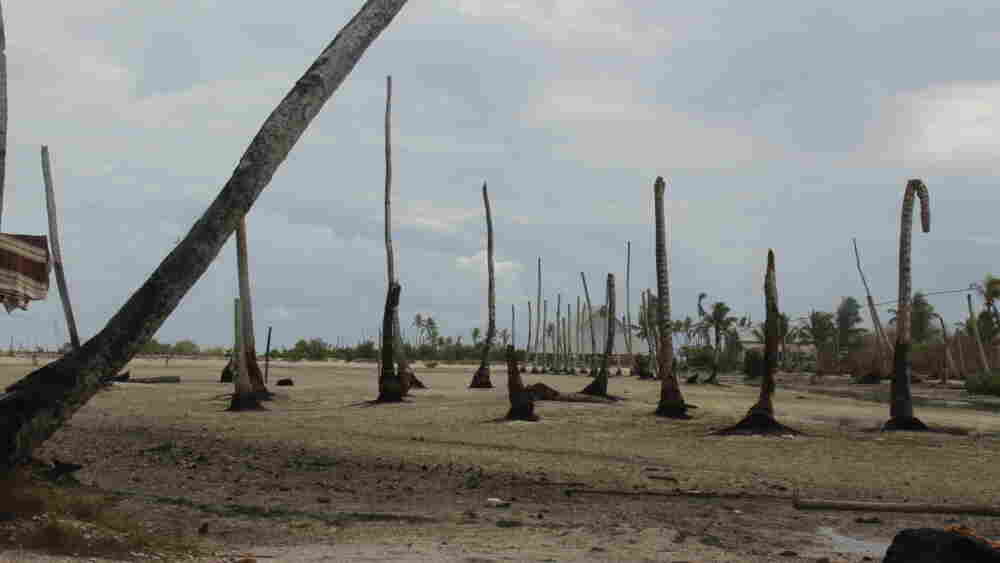 Aata Maroieta, the village’s representative to the island council, led me to where his house once stood. It’s a thin, empty strip of land – maybe 15 feet wide – with a pond on one side and the lagoon on the other.  He pointed to the lagoon.

“The manaeba used to be here,” he said through an interpreter. “Somewhere in the sea.”

Manaebas are the traditional meetinghouses in Kiribati, and they can be quite large, sometimes able to fit more than a hundred people.  This is what the former Tebunginako town center looks like today: 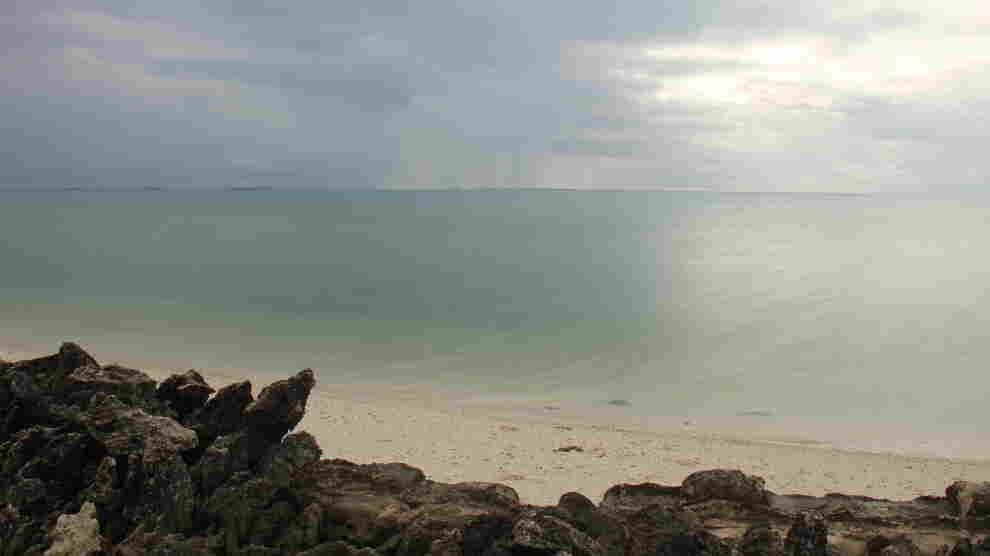 In the late 1970s, Maroieta said, the tide started creeping into the village. Finally, after a few years, a strong westerly wind came and battered them with waves.

“Just one go, everyone moved, because it just came through the land,” he said.  “The water came right through our land and our well and our houses.”

They let the manaeba fall. They built and rebuilt a seawall, to protect their freshwater pond. It didn’t hold. Gradually, villagers began to disperse to other parts of the island. According to Maroieta, about 400 people used to live in Tebunginako. Now there are just 100, or so.

“Before it was just a village,” Maroieta said.  “Now it’s a lot of work to call people.  We don’t have phones here, we don’t have any other ways of communication. The only way to communicate with each other is to walk by feet and bicycle and call everyone for a meeting, maybe a village meeting or a church meeting.”

The Kiribati government uses Tebunginako as a kind of poster child for the ravages of climate change. It is a grim poster.  But climate change wasn’t the only reason for the village’s demise, and perhaps not even the primary one.

Maroieta puts some of the blame on the villagers themselves, who years ago blocked part of the lagoon to create a freshwater milkfish pond.  In addition, a study by the South Pacific Applied Geoscience Commission found that Tebunginako residents settled on a piece of land prone to dramatic shifts in coastline because of a channel that formerly ran alongside it. Some parts of the village have receded more than 250 feet.

And as for climate change’s role, the author of that report, Arthur Webb, says there just isn’t enough strong research in the Pacific to know for sure. In an e-mail he said:

“Perhaps we should not spend so much time and effort agonising over attribution. From the perspective of managing the vulnerability of that community and putting in place a tangible solution, it is better to accept that they are in a location which is vulnerable and climate change is likely to exacerbate that aspect of vulnerability.”

Which actually makes Tebunginako quite a good poster child for Kiribati, though not precisely for the reasons the government claims.  Climate change doesn’t happen in a vacuum.  As I’ve explained on this blog, the pressures on the country’s environment are more than just climate change and sea-level rise. But just as with Tebunginako, when you add those things into the mix, the whole situation becomes even more precarious.