Accessibility links
On Deficit Reduction: What Are The Chances? : The Two-Way The co-chairman of the president's Fiscal Responsibility Commission warns that shrinking deficits and debts will be painful. How likely is it that lawmakers will make the tough choices?

'The Solutions Are Painful'

On Deficit Reduction: What Are The Chances?

On Deficit Reduction: What Are The Chances? 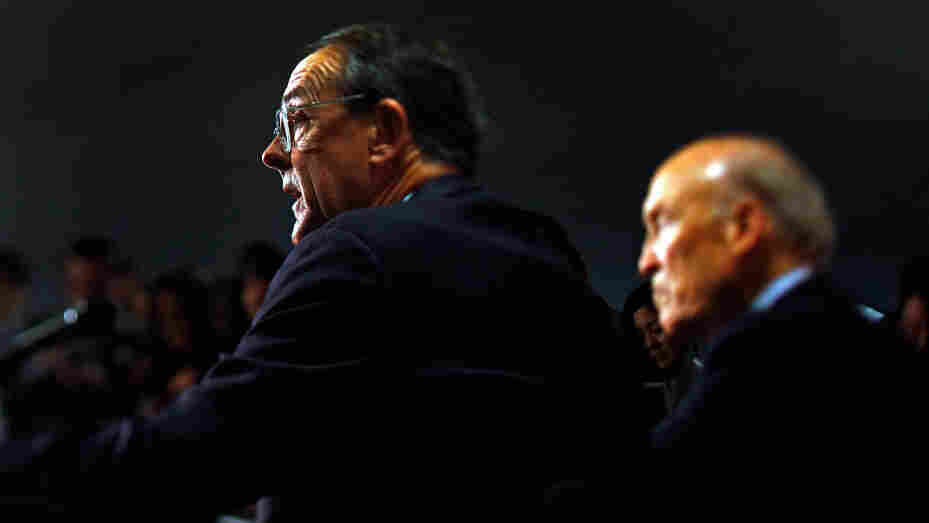 Erskine Bowles, a Democrat (at left), and former Sen. Alan Simpson, a Republican, are co-chairmen of the commission. They spoke with reporters Tuesday in Washington. David Gilkey/NPR hide caption

Anyone who's worried about the federal government's soaring deficits and the exploding national debt is likely paying attention to today's official release of the plan put together by the co-chairman of the president's National Commission on Fiscal Responsibility and Reform.

Of course, as NPR's John Ydstie reported earlier on Morning Edition, commission co-chair Erskine Bowles warns there is lots not to like about what needs to be done. "There are plenty of reasons not to vote for this plan," Bowles said, but "the problem is real, the solutions are painful and there are no easy choices":

'The Solutions Are Painful'

If Bowles' dire words aren't enough to dampen any deficit hawk's hopes, there's the reality that the bipartisan commission appears to be deeply split and likely won't give strong support to the co-chairmen's recommendations (which take aim at such political sacred cows as the tax deduction for mortgage interest). A more united front from the commission might add to pressure on Congress to act.

This makes us wonder:

Update at 12:15 p.m. ET: Sen. Judd Gregg, R-NH, a member of the commission who as we said earlier has announced he will support the co-chairmen's plan, just told reporters it is "a very strong, substantive step down the road."

Gregg, who did not seek reelection, is leaving office at the end of the year.

Update at 12:05 p.m. ET: Frank posts over at It's All Politics that "Senate Republicans have sent a letter to Sen. Harry Reid, the Senate Majority Leader, warning him that they will use the chamber's procedural tactics to stall any legislation other than that which would extend the Bush tax cuts and deal with the nation's debt limit."

But, the AP writes that "a tough new cost-cutting playbook submitted by the co-chairmen of President Obama's debt commission has been embraced by Sens. Kent Conrad and Judd Gregg, the first two elected officials to endorse it." Conrad is a North Dakota Democrat. Gregg is a New Hampshire Republican.