Accessibility links
Stocks Rally On Good Economic News : The Two-Way The latest indicators signal that the U.S. and global economies are doing a little better than expected, and investors like what they're hearing. 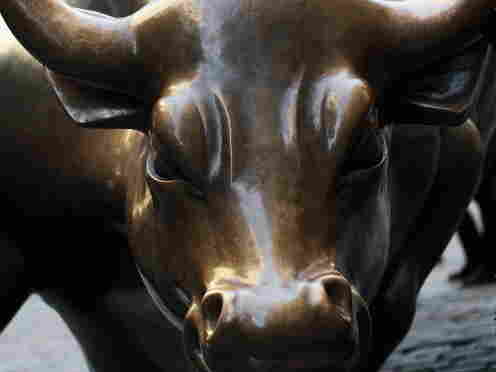 The Institute for Supply Management reports that the nation's manufacturing sector "expanded in November for the 16th consecutive month."

And the Census Bureau says construction spending was up 0.7% in October from September.

Add those together and it probably shouldn't be a surprise that the Dow Jones industrial average is up about 240 points right now (around 2.2%). Other stock market indicators are up as well.

Update at 4 p.m. ET: The final numbers aren't in yet, but it's clear the market's rally extended to the closing bell -- the Dow remains up about 250 points for the day, about 2.25%.

Update at 3:30 p.m. ET: With a half hour to go before the closing bell, the bulls are still running. The Dow is up about 260 points and other indices are well into positive territory as well.

Update at 2:05 p.m. ET. More positive news, this time from the Federal Reserve's "beige book" review of conditions around the nation:

"Reports from the twelve Federal Reserve Districts indicate that the economy continued to improve, on balance, during the reporting period from early/mid-October to mid-November. Economic activity in the Boston, Cleveland, Atlanta, Dallas, and San Francisco Districts increased at a slight to modest pace, while a somewhat stronger pace of economic activity was seen in New York, Richmond, Chicago, Minneapolis, and Kansas City. Philadelphia and St. Louis reported business conditions as mixed."