Accessibility links
'Trillions Of Earths' Could Be Orbiting 300 Sextillion Stars : The Two-Way New research hints there may be three times more stars in the universe than previously thought. And that, scientists say, could mean more plants that could support life.

'Trillions Of Earths' Could Be Orbiting 300 Sextillion Stars

'Trillions Of Earths' Could Be Orbiting 300 Sextillion Stars

If only Carl Sagan were still with us. We can just hear him saying "sextillions and sextillions." 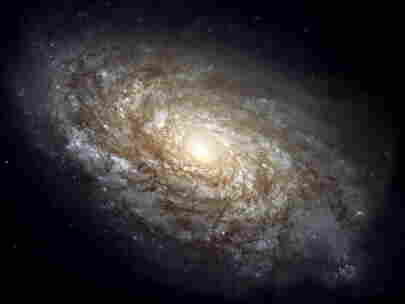 There's word from some scientists today that there may be three times more stars in the universe than was previously thought -- and many, many planets that could support life.

If they're right, it means there could be as many as 300 sextillion (a number we weren't familiar with, to be honest) stars. Want to write that down? It's a 3 followed by 23 zeroes. Like this:

The research, led by Yale astronomer Pieter van Dokkum, is being published by the journal Nature.  In an interview with Space.com, von Dokkum said the findings are based on data gathered when the researchers were analyzing "red dwarfs" -- stars that are dimmer than our sun and much smaller.

The "faint signatures" of those red dwarfs in eight galaxies "located between about 50 million and 300 million light-years away," led to the new calculation of how many stars are out there, Space.com writes.

Then there's this, also at Space.com:

"There are possibly trillions of Earths orbiting these stars," van Dokkum said. He added that the red dwarfs they discovered, which are typically more than 10 billion years old, have been around long enough for complex life to evolve. "It's one reason why people are interested in this type of star."

When some of us were young, we thought we'd be living in space by now and meeting some exotic characters. So, we wonder. What do think?