Accessibility links
Gen. Petraeus: Afghan Handover By 2014 Not A Sure Thing : The Two-Way "I don't know that you say 'confident,' " the commander of U.S. forces tells ABC News when asked about a handover by NATO's deadline.

Gen. Petraeus: Afghan Handover By 2014 Not A Sure Thing

Gen. Petraeus: Afghan Handover By 2014 Not A Sure Thing 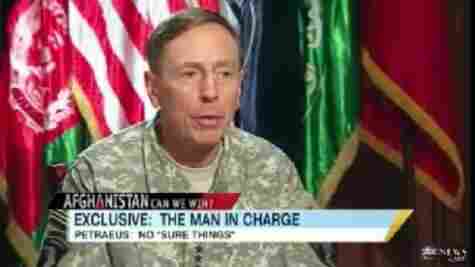 The headline from Good Morning America's interview this morning with the commander of U.S. forces in Afghanistan comes when Gen. David Petraeus says there's no guarantee that the Afghan Army will be able to completely take over operations there from U.S. forces by the end of 2014 -- the NATO deadline.

Is he confident that the deadline will be met?

"I don't know that you say 'confident,' " Petraeus told ABC's George Stephanopoulos. It is "a reasonable prospect ... (and) we have to do everything we can to increase the chances" of success. But, "I don't think there are any sure things in this kind of endeavor."

GMA's piece on the interview is a bit more than 7 minutes long. Petraeus' comments on the 2014 deadline begin around the 6-minute mark:

Petraeus' comments come as the Obama administration finishes up work on its latest review of strategy and policy in Afghanistan. Later today on All Things Considered, by the way, NPR's Quil Lawrence begins a series of reports from Afghanistan on the historical and social factors that have plagued nations that have been involved in that central Asian nation's affairs. We're expecting some blog posts this week from Quil and NPR's Jackie Northam, who's also reporting for the series.

Click here to find an NPR station that broadcasts or streams ATC.