Accessibility links
Swiss Shut Down WikiLeaks' Bank Account : The Two-Way As the furor over the website's disclosures of U.S. diplomatic cables enters its second week, WikiLeaks faces new challenges and its founder still faces possible arrest on an unrelated charge.

Some of the latest developments related to WikiLeaks' latest disclosures and the reactions to them:

-- "The Swiss postal system has pulled the plug on WikiLeaks' bank account in another serious setback for the secret-spilling website that is fighting to stay online. ... American web companies Amazon.com, Paypal, and EveryDNS have pulled the plug on their relationships with WikiLeaks one after the other." (Associated Press) 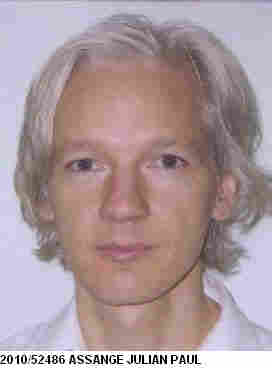 InterPol, which has issued a worldwide alert for WikiLeaks founder Julian Assange because of a Swedish arrest warrant connected to an alleged rape, has released this photo of him. interpol.int hide caption

-- WikiLeaks, on its Twitter page, says more than 500 other websites around the world are now "mirroring" its content. So, if WikiLeaks's website (now hosted here) comes under another attack, the information should still be available.

-- "A long list of key facilities around the world that the US describes as vital to its national security has been released by Wikileaks." (BBC News)

-- "Scotland Yard has received the paperwork required to arrest WikiLeaks founder Julian Assange, sources said tonight. A fresh European Arrest Warrant has been issued by the authorities in Sweden where he is wanted for questioning over claims of sexual assault." (The Independent) Assange has said he did nothing wrong.

-- Attorney General Eric Holder says the criminal investigation into the leak of the cables is on-going. The Espionage Act may not be the only law used in the case, he adds. (NPR's Carrie Johnson)