Accessibility links
Printing Problems Plague New $100 Bills : The Two-Way More than 1 billion new, high-tech bills are now in storage and must be examined for flaws. Many may have to be destroyed because of a creasing problem that has put unwanted lines on the currency.

More than 1 billion new, high-tech $100 bills are in storage and won't be circulated until it's figured out how many must be destroyed because of flaws that occurred during their printing. Meanwhile, production of the bills has been halted. 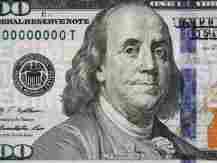 There have been some problems. newmoney.gov hide caption

CNBC, which broke the story, writes that there's "a creasing problem in which paper folds over during production, revealing a blank unlinked portion of the bill face."

These are the Benjamin Franklins that are designed to, as Morning Edition reported back in April, thwart counterfeiters. Along with a watermark and security strip, there's "a 3D panel with images of bells that change to the number 100 when tilted."

Bureau of Engraving & Printing spokeswoman Darlene Anderson tells us that that while it's true that "some of the notes do have a creasing problem,'' the bureau is "confident that a high proportion" will end up in circulation.

While CNBC reported that it had been told by a source that as many as 30 percent of the bills may be flawed, Anderson said "it's a much smaller percentage than that." The bureau, she added, is working with its printer to solve the problem. It is also developing a mechanized system that will allow it to examine all 1.1 billion of the bills that have been printed so far. Those that are flawed will be shredded (not burned), Anderson said.

The bills were supposed to be ready for circulation next February. The Federal Reserve, in what looks to be a foreshadowing of the problem, said in October that there would be a "delay in the issue date."

Anderson said it isn't known just yet how long it will take to examine the bills and just when production will resume. Meanwhile, printing of the "old" $100 bills has resumed -- to make sure the supply of Benjamins meets demand.

The government has spent about $120 million so far on the bills' production, CNBC estimates.