Accessibility links
Obama 'Itching For A Fight' On Taxes, But Not Yet : The Two-Way At a White House news conference, he fires back at critics who say he's given too much away to Republicans.

President Obama: "I've got a whole bunch of lines in the sand."

Obama: I'm 'Itching For A Fight' 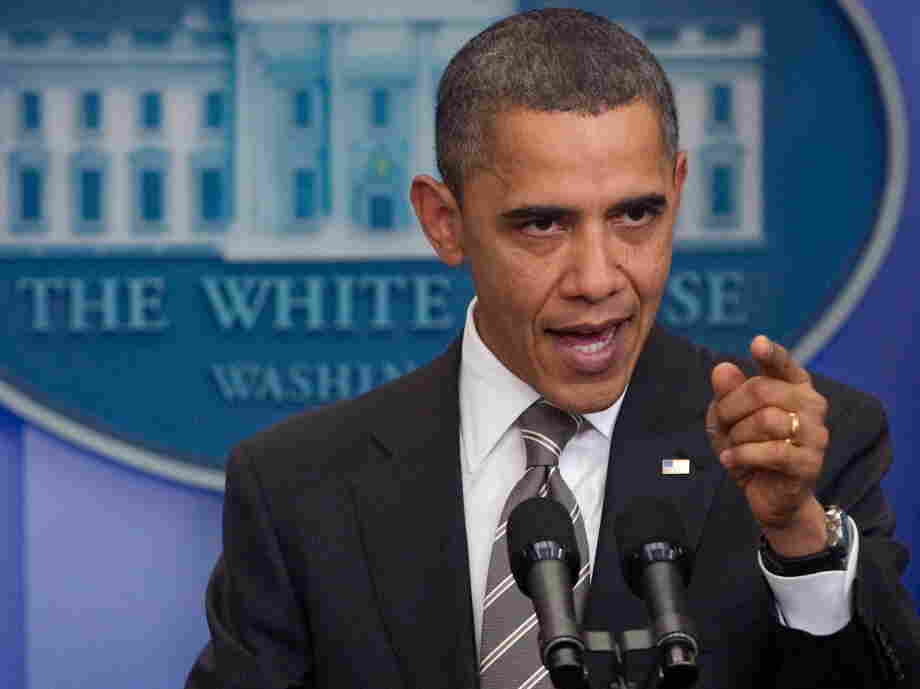 President Obama argued today that he has kept to the spirit of promises he made during the 2008 campaign, that tax deals he struck with Republicans will work to the benefit of most Americans and that he will use the next two years to fight back against the GOP policies he things are misguided.

He said all those things -- sometimes with some edge in his voice -- during a news conference in the briefing room at the White House. We used this post to "live-blog" as it happened. Scroll down and "read up" if you want to see how things happened.

Update at 3:50 p.m. ET. Here's audio from the last 7 minutes of the news conference, when the president's voice took on that edge we noticed:

President Obama: "I've got a whole bunch of lines in the sand."

Sifting through some of the other things the president said about the tax deal he's cut with Republican leaders, Frank suggests that these lines stand out because of the way Obama made his point:

"It's tempting not to negotiate with hostage takers -- unless the hostage gets harmed. Then, people will question the wisdom of that strategy. In this case, the hostage was the American people, and I was not willing to see them get harmed.''

His voice showing some edge, Obama says of critics from the left who say he's given away too much "take a tally, look at what I promised during the campaign." He's made progress on them all, Obama insists.

To his "Democratic friends," some of who have been critical, Obama says "let's make sure we understand this is a long game -- it's not a short game."

Is there an issue he will "go to the mat for?" Obama is asked.

"I've got a whole bunch of lines in the sand," Obama says, during an answer in which some edge gets into his voice and he shows a bit of "cool heat":

-- "Not making tax cuts for the wealthy permanent."

-- "Making sure the things that most impact middle-class families and low-income families ... are preserved."

Criticism that he gave in too much to Republicans reminds him, Obama says, of criticism he got after passage of the health care overhaul. "Because there was a provision in there that they didn't get," he says of critics, "somehow that was a sign of weakness and compromise" even though it was a "signature piece of legislation where we finally got health care for all Americans."

"Let's face it, we will never get anything done" if compromises aren't sometimes made, Obama adds.

Asked by NPR's Scott Horsley if he will use the next two years to make the case that extending the Bush-era tax cuts to the wealthiest -- the Republican plan -- was wrong and that the tax code needs to be overhauled, Obama says yes.

"Part of what I want to do is essentially get the American people in a safe place ... a stable place," with the economy growing, he says, so that such debates can resume.

"I don't make judgments based on what the conventional wisdom is at any point in time," the president says, but on "what's right for the country."

He's "itching for a fight" with Republicans on major issues, Obama adds.

Continuing on his theme that not cutting a deal on taxes would have hurt too many Americans, Obama says "I would have enjoyed the battle with Republicans over the next month or two" in part because "the American people are on our side."

The taxes deal, Obama says, will provide "an additional (economic) boost that is substantially more significant than most economic forecasters had expected."

"I will continue to fight before the American people to make the point that the Republican position is wrong" on taxes, says the president. But the "collateral damage" -- higher taxes for all Americans if a deal wasn't struck -- wasn't worth that battle now.

"This is their Holy Grail," Obama says of Republicans' push for extending the tax cuts to all Americans, including those who earn more than $250,000 a year.

It "might have been good politics" to fight Republicans over extending the tax cuts for wealthier Americans, Obama says, but that "would be a bad deal for the economy and American people" if it meant the majority of Americans would have seen their taxes go up as the Bush-era cuts expired.

The president starts with comments about the tax cut deal. Because of the agreement, he says, "middle-class Americans won't see their taxes go up" on Jan. 1 -- "which is what I promised."

Republicans, he says, "were unwilling to budge," on extending tax cuts for wealthier Americans -- "something I opposed."

But, "it's a good deal for the American people" because the deal should help boost job growth, the president argues.

"I will fight to end them" he says of the tax cuts for wealthier Americans, which are under the deal would now expire in two years instead of on Jan. 1.

Update at 2:24 p.m. ET: The White House webcast just went "live," so things must be about to start.