Accessibility links
An Afghan Girl's Death Still Echoes; Those Responsible Still Hold Sway : The Two-Way Behind an old Soviet-built housing block in an east Kabul neighborhood called Macroyan, sits a tombstone without a grave. It honors a young girl who jumped to her death in 1993. Her sad story still haunts many. 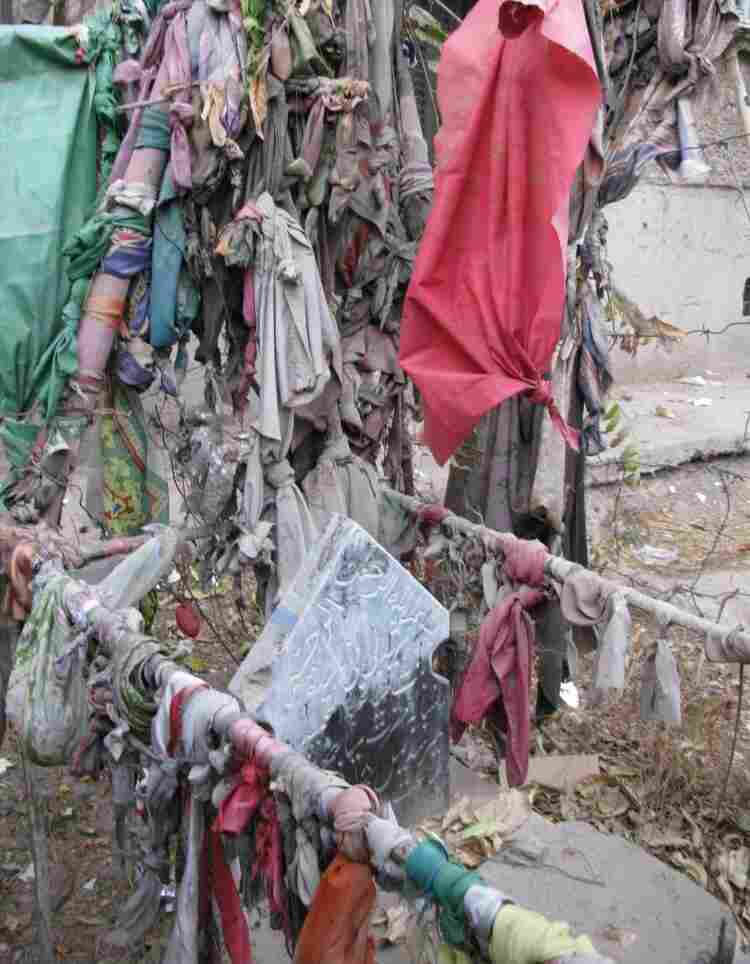 Behind an old Soviet-built housing block in an east Kabul neighborhood called Macroyan, sits a tombstone without a grave. Colorful flags left by visitors surround a girl's name, Naheed, written on gray slate in Persian calligraphy. In the late summer of 1993 she jumped to her death from the 6th floor -- people there say a group of mujahedeen had broken into her apartment and tried to rape her.

I stopped by the shrine while researching for this week’s Afghanistan history series -- Naheed's story became a famous one in the 1990s, a parable for how deep the country had descended into madness after the mujahedeen (holy-warriors) defeated the Soviets and then fell to fighting each other, street by street, for the capital and the rest of the country.

It didn't take long to find a neighbor who says he was there that day.

"We were in my apartment when I heard her father scream 'my daughter's been abducted by the jihadis!' " said an older man who gave his name only as Kareem. "Her father walked behind the apartment block and saw her body. Then he took her and drove to the hospital, but she had already died on the spot."

Kareem said the mujahedeen had come from a nearby police checkpoint and found the 14-year-old girl at home. She leapt from the balcony instead of allowing the men to violate her.

"It was civil war and Kabul was in flames. The residents had fled, and few families were living here," said Kareem.

The fighting between was so merciless that when the puritanical Taliban arrived, many civilians in Kabul welcomed them.  I stopped by the shrine for another reason though.

In a speech this fall, Afghan President Hamid Karzai had invoked the story of young Naheed. He was talking about a U.S. plan to create local police forces across Afghanistan to help fight the Taliban. Karzai has been nervous that such groups will turn into personal militias for warlords, and for the same reason he's pushed to outlaw the legion of private security contractors in Afghanistan.

"We people of Afghanistan remember the day when the Russians withdrew from Afghanistan, what the Russian-made militia did in Afghanistan,"  said Karzai, "Our girls jumped from apartments in Macroyan to preserve their honor."

The only problem with President Karzai's remark was that by all accounts, Naheed was not being chased by a Soviet-sponsored militia. Quite the opposite. The neighborhood was controlled by an anti-Soviet mujahedeen commander turned warlord. And almost every single one of the surviving commanders has ended up as part of the Karzai government, despite accusations of corruption or narco-trafficking. In 2007 the parliament, also full of former commanders, passed an amnesty for all the war crimes committed during the 1990s.

Early in his presidency, Karzai gently pushed away the warlords, but later -– perhaps needing their support to get votes in last year’s presidential election -- Karzai brought most of them back in.

I asked Kareem his opinion about the fact that the men who chased Naheed to her death and committed many other crimes are now in the government or were loyal to those who are now in positions of power. He answered with an Afghan adage.

"If I lie I'm ashamed, but if I tell the truth I'm afraid," he said, and nothing more.

(NPR's Quil Lawrence is based in Kabul. He was part of the team that worked on a series of stories about Afghanistan for this week's editions of All Things Considered. Part one — "For Invaders, A Well-Worn Path Out Of Afghanistan" — aired Monday.

Part two, on the aftermath of the Soviets' withdrawal, was on Tuesday's show. Part three focused on Afghan President Hamid Karzai. Part four looked at what went wrong with the U.S. effort in Afghanistan the past nine years, and how the strategy has changed, More of Quil's reporting is due on today's edition of ATC. Click here to find an NPR station that broadcasts or streams the show.)