Accessibility links
Agathe Von Trapp, Oldest Of 'Sound Of Music' Kids, Has Died : The Two-Way There's a good chance you've seen the movie or the musical -- or at least heard some of the Rodgers and Hammerstein songs. So the sad news may also bring back some fond memories.

There's a pretty good chance you've seen the movie or the musical -- or at least heard some of the Rodgers and Hammerstein songs.

So this sad news may also bring back some fond memories: 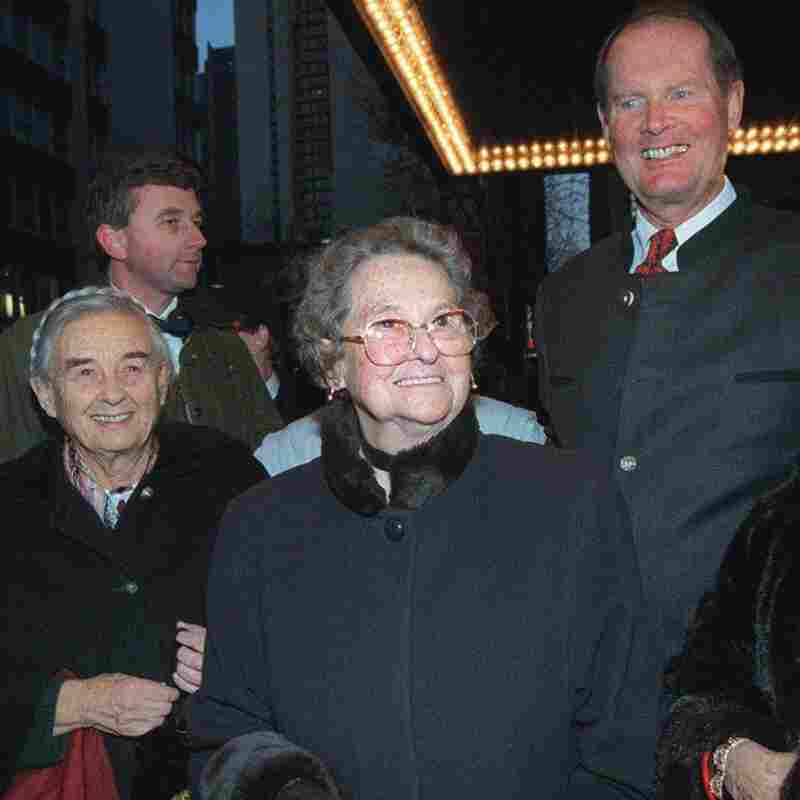 Agathe von Trapp, center, with her sister, Maria, and brother, Johannes, right, at the Martin Beck Theatre to see the reopening of the Broadway musical 'The Sound of Music' on March 12, 1998, in New York. Lynsey Addario /AP hide caption

Agathe von Trapp, the oldest daughter among the seven children made famous by The Sound of Music, has died. She was 97 and had retired from teaching in the kindergarten program at Sacred Heart Catholic parish in Glyndon, Md.

If you're not familiar with the von Trapp family's story, it's told on the website of the lodge in Stowe, Vt., that they opened after World War II. According to that site, one of the seven von Trapp children survives -- Maria F. von Trapp, who was born in 1914 -- as do two half-sisters and a half-brother.

The 1965 movie focuses on Maria von Trapp, Agathe's stepmother (not to be confused with her surviving sister), and the family's flight from Nazi-occupied Austria.

Julie Andrews played Maria and this clip from Do-Re-Mi will stick in your head (if the song isn't already there). Enjoy:

Update at 3:55 p.m. ET: It's worth noting that this has been a bittersweet week for fans of several types of music. Jazz pianist and former NPR host Billy Taylor, 89, died Tuesday night. And Teena Marie, the "Ivory Queen of Soul" died over the weekend. She was 54.

NPR.org earlier this week looked back at "Musicians We Lost In 2010."