Accessibility links
Key Thing To Watch Now In Egypt: How The Army Reacts : The Two-Way Will soldiers respond with force if protests grow violent again? For now, demonstrators are welcoming the Army's presence.

Key Thing To Watch Now In Egypt: How The Army Reacts

Key Thing To Watch Now In Egypt: How The Army Reacts 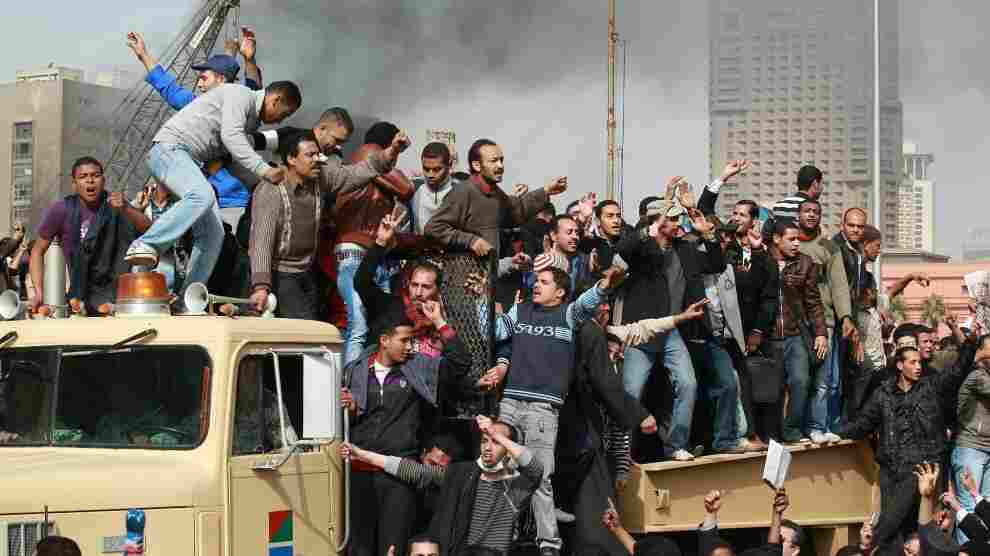 Protesters cheered and chanted earlier today (Jan. 29, 2011) as they rode on an Army truck that was rolling into Cairo's Tahrir Square. Peter Macdiarmid/Getty Images hide caption 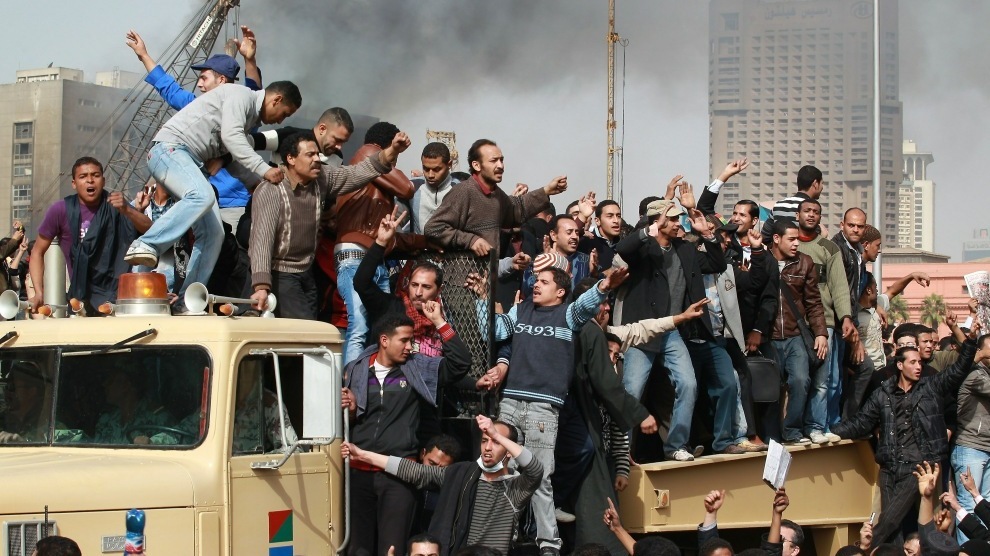 Protesters cheered and chanted earlier today (Jan. 29, 2011) as they rode on an Army truck that was rolling into Cairo's Tahrir Square.

When NPR's Soraya Sarhaddi Nelson was on the air from Cairo this morning with Weekend Edition's Scott Simon, Egyptian Army tanks and personnel carriers rolled into Tahrir Square. And anti-government protesters, she said, were riding atop them — cheering and waving to others in the crowd.

"It is amazing how receptive the crowd is to the Army. ... They are welcoming them like heroes!" Soraya shouted over the noise.

"Why are people cheering and crawling all over the tanks?" Scott asked. "Are they certain the Army is on their side?"

"They are absolutely convinced of this," Soraya said. But, she added, "at this stage the Army is still being deployed by the government and Mr. Mubarak."

And that's a key point. While the soldiers she saw today appeared relaxed and the crowd was glad to see them replace the police who had battled with demonstrators in recent days, the Army — at this point — still takes orders from Mubarak. And how it reacts if things start getting tense again — for instance, if protesters defy curfews — is one of the next huge questions.

As Heather Hurlburt writes for The New Republic, Egypt's military "will ultimately, though perhaps not today, make the decisive difference. Years of repression and neglect mean that there's no obvious civilian — much less secular — force that can immediately step in to govern Egypt. But there are institutions: the military; the security services; blocs of elites around business, academic, and religious institutions; and the political parties and movements. The choices they make now will be central to what happens and how."

"Deploying tanks is a sign of desperation, and raises the question of when the military might begin to doubt Mr. Mubarak's viability. The tipping point could come, analysts believe, if the military is ordered to fire on demonstrators in any large numbers. ...

" 'If the military fires on civilians after demonstrations that are clearly popular, that will imperil the standing of the military, its integrity,' said Samer Shehata, a professor of Arab politics at Georgetown University. 'This time the institution's future is at risk.' "

Night is coming in Egypt and curfews are going into effect. So keep an eye what the Army does next.

"Egyptian state-owned Nile TV shows video of President Mubarak meeting top military commanders. By his side were Vice-President Omar Suleiman and Defense Minister Tantawi. The channel said the meeting took place in the 'center for military operations' to 'follow up the armed forces' operations to control the security situation'."

"Nightfall now in Alexandria, crowds still out on streets, none seem to heed curfew and the army does not enforce it."