Accessibility links
Secretary Clinton: U.S. Doesn't Want To 'Send Any Message' About Mubarak : The Two-Way "We do not want to send any message about backing forward or backing back," she tells CNN when asked if the U.S. is backing away from the Egyptian leader. What America wants, says Clinton, is "a democratic Egypt." 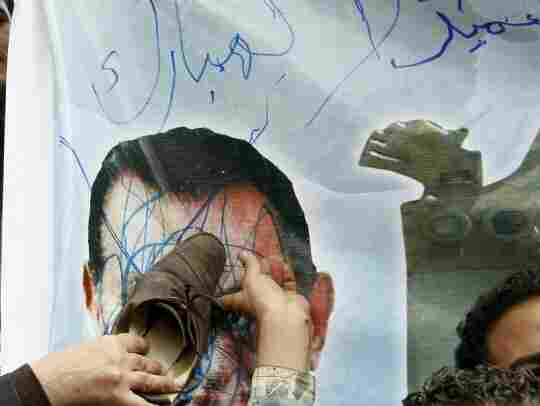 Egyptian demonstrators used a shoe to hit a picture of President Hosni Mubarak during a protest at Tahrir Square in Cairo today (Jan. 30, 2011). That's one of the strongest insults in their culture. Mohammed Abed/AFP/Getty Images hide caption 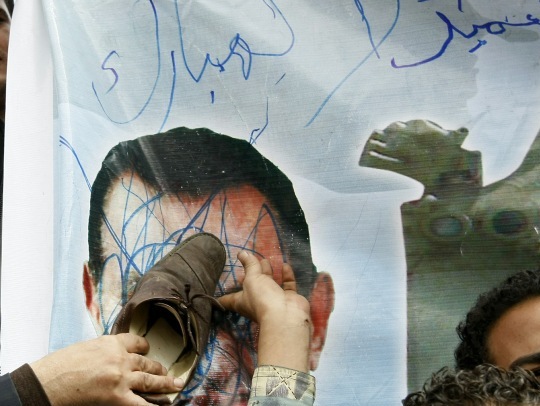 Egyptian demonstrators used a shoe to hit a picture of President Hosni Mubarak during a protest at Tahrir Square in Cairo today (Jan. 30, 2011). That's one of the strongest insults in their culture.

Just moments ago on CNN's State of the Union, Secretary of State Hillary Rodham Clinton was asked whether the U.S. is beginning to back away from Egyptian President Hosni Mubarak.

"We do not want to send any message about backing forward or backing back," Clinton said in response. What the U.S. wants to do, she said, is "to help clear the air so that those who remain in power, starting with President Mubarak ... will begin a process of reaching out" to those demanding reforms in Egypt.

Clinton was also asked whose side the U.S. is on, Mubarak or the demonstrators. "There's another choice," she said, "it's the Egyptian people." The U.S. wants, Clinton said, a "democratic Egypt that provides both political and economic rights to its people."

We asked yesterday whether it's time for the U.S. to cut ties with Mubarak, and most of the Two-Way readers who responded favored cutting those ties.

Clinton is due on the other major Sunday morning talk shows. We'll pass along word about what else she has to say.

NPR.org's latest coverage of the crisis in Egypt starts here.

Update at 11:10 a.m. ET. NPR's Michele Kelemen sums up Clinton's message this way: The secretary "made clear that no one is satisfied with the steps Hosni Mubarak has taken so far," Michele said on NPR's newscast.

Update at 10:35 a.m. ET: On NBC's Meet the Press, Clinton was asked if she would call Mubarak's regime "stable."

"I'm not going to get into either/or choices," she said.

Asked if Mubarak should call for "free and fair elections" and pledge that he would not run, Clinton said the U.S. has long called for such elections, but that the issue of whether Mubarak should or should not run again is among the issues that "are up to the Egyptian people."

And asked if Mubarak has done enough to stay in power, Clinton said "it's not a question of who retains power. It's how are [the government is] going to respond to the legitimate needs and grievances expressed by the Egyptian people."

Would the U.S. offer Mubarak sanctuary? "I believe strongly that we are only in the beginning of what is unfolding in Egypt," Clinton said. "I am not going to go into ... speculation."

Does she want Mubarak to stay in power? "I've never said that," said Clinton "I want the Egyptian people to have the chance to chart a new future.

Update at 10:30 a.m. ET. CNN has posted the video of Clinton's appearance on State of the Union:

Update at 10:15 a.m. ET: On ABC-TV's This Week with Christiane Amanpour, Clinton said the U.S. has not warned Egypt that American aid will be cut off if the government is too harsh in its response to the protests. But the U.S. has made clear that it expects Egypt will respect the rights of peaceful protesters, Clinton said. And the U.S. expects a transition to "real democracy," Clinton added.

"We believe that democracy, human rights, economic reform — are in the best interests of the Egyptian people," said Clinton, and that any government which doesn't meet those needs is "highly vulnerable." Egypt's government must, "take concrete steps" toward democratic reform, she also said.

"The U.S. expects that the protests in Egypt will lead to free and fair elections as part of an 'orderly' transition to 'real democracy,' Secretary of State Hillary Rodham Clinton said Sunday as the Obama administration worked to get a handle on the fast-moving upheaval shaking the American ally. 'I want the Egyptian people to have a chance to chart a new future,' said Clinton, who addressed the volatile situation in back-to-back interviews on the five morning TV news shows before leaving on a trip to Haiti."