Accessibility links
As Final Internet Provider Goes Off-Line, Egyptians Seek Simpler Options : The Two-Way With help from national and international groups, Egyptians are finding ways to get their stories out.

For the past few hours, people on Twitter have been reporting that the last Internet Service Provider still functioning in Egypt has gone off line.

Renesys, a company that specializes in internet security and tracks internet traffic, has confirmed that Noor Group is no longer reachable from outside of Egypt. 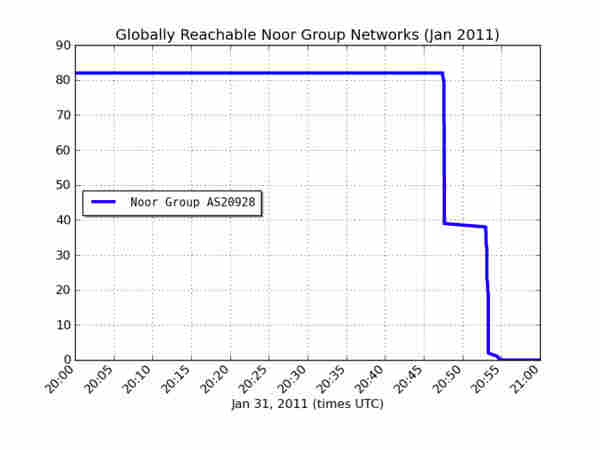 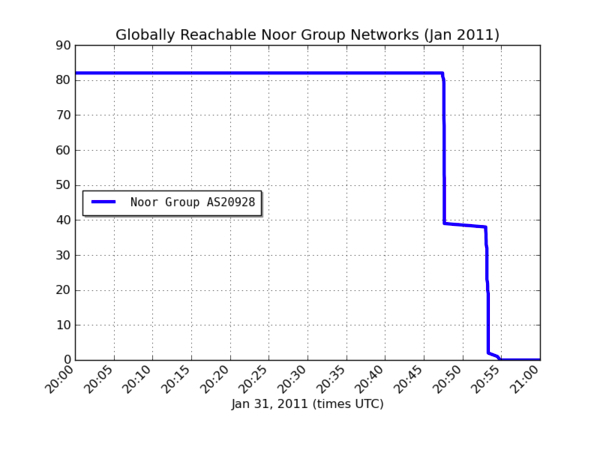 The government in Egypt shut down most of the internet, last week. This afternoon, NPR's Michelle Norris spoke to Danny O'Brien an advocacy coordinator for the Committee to Protect Journalists.

O'Brien said there's no clear explanation why Noor had been kept alive for so long. An Internet shutdown of this magnitude takes a lot of coordination. Essentially, he said, most of Egypt's internet service providers withdrew their entries from a worldwide internet registry simultaneously.

"So suddenly, for all intents and purposes, in the rest of the world, Egypt just stopped existing on the Internet," said O'Brien.

Noor was online until about 4 p.m. ET, today.

"We don't know why that is," said O'Brien. "It's been suggested that it's because Noor Group offers services to the Egyptian stock exchange and other large companies, but that doesn't explain everything because Noor also offers broadband connectivity to a few people. So there are actually many customers of this particular ISP who are acting as sort of gathering points for other people trying to upload information and share videos."

The BBC reports that because of the crackdown, Egyptians have turned to low-tech ways of communicating, including through morse code on ham radios. Dial-up Internet has also become essential:

Dial-up modems are one of the most popular routes for Egyptians to get back online. Long lists of international numbers that connect to dial-up modems are circulating in Egypt thanks to net activists We Re-Build, Telecomix and others.

Dial-up numbers featured heavily in Twitter messages tagged with hashes related to the protests such as #egypt and #jan25.

ISPs in France, the US, Sweden, Spain and many other nations have set up pools of modems that will accept international calls to get information to and from protesters. Many have waived fees to make it easier for people to connect.

Others, like the group Anonymous — yes, the same one that unleashed cyber attacks on Mastercard and Visa in December — have put together guides on how to get around filters. Others, like the blog Manalaa, have information on how to turn your mobile phone into a dial-up modem.

Google engineers did some work over the weekend creating a service that allows Egyptians to call a number, leave a message and it automatically gets translated into a tweet.

Last Saturday, though, the government also forced some mobile phone companies off the grid.