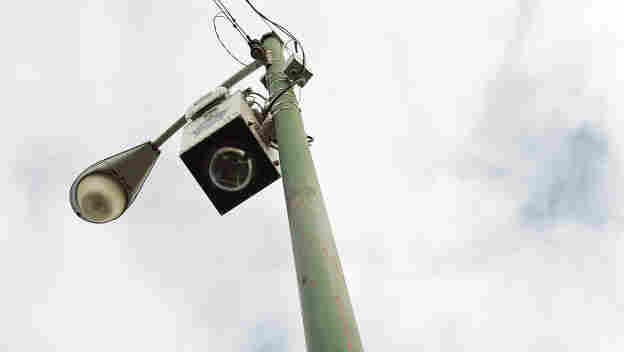 A new street surveillance camera in seen on top of a light pole along a street December 16, 2004. Tim Boyle/Getty Images hide caption 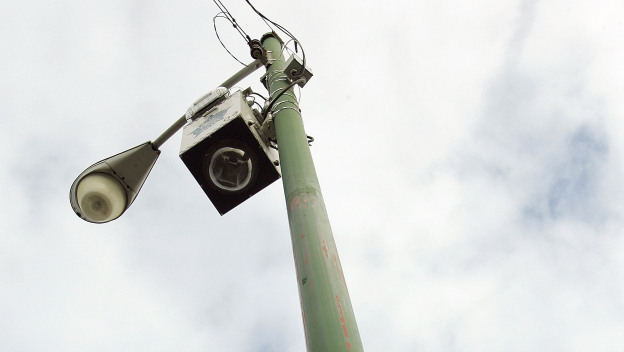 A new street surveillance camera in seen on top of a light pole along a street December 16, 2004.

Chicago has more than 10,000 public and private surveillance cameras throughout the city. According to the AFP, 1,250 of them are so powerful, they have the ability to zoom in and read the text of a book. That makes Chicago's network the most "extensive and integrated" in the country.

Now, the system is under scrutiny from the American Civil Liberties Union of Illinois, which says the cameras violate a "key aspect of the fundamental American right to be left alone."

Today, the ACLU released a 38-page report, in which they write:

Each of us then will wonder whether the government is watching and recording us when we walk into a psychiatrist's office, a reproductive health care center, a political meeting, a theater performance, or a book store. While the dystopia described by George Orwell in "1984" has not yet been realized, Chicago's current 10,000 surveillance cameras are a significant step in this direction. And a camera "on every corner" would be an even greater step.

The ACLU makes a series of suggestions to keep the cameras from invading privacy. They say that surveillance should not happen in private spaces and camera operators should have "probable cause of either criminal activity or of a threat to public safety" before using the camera's face recognition function. The ACLU also asks that images from the cameras be discarded after a reasonable period of time. Most importantly, the ACLU asks that Chicago stop installing new cameras.

The Chicago Tribune reports that Mayor Richard Daley said the cameras are a cost-effective way to keep crime at bay:

"What cameras are, is to prevent crime, to tell criminals, 'Yes, you are going to be focused,'" Daley said at the opening of a senior housing development in Pilsen. "There's nothing wrong with that." ...

If wealthier Chicagoans can enjoy the protection of private security cameras around their buildings, then other citizens should have that same type of protection on the streets in their neighborhoods, he said.

The Chicago Sun-Times says most aldermen agree with Daley:

Ald. Edward M. Burke (14th), chairman of the City Council's Finance Committee, scoffed at the demand for a halt in installing new cameras.

"Anyone who's had a tour of the 911 center would agree that surveillance cameras are one of the most effective tools in law enforcement today and it seems like they're very popular with the local residents," said Burke, a former Chicago Police officer.

"I wouldn't want to see anything that would interfere with what the Police Department has been able to achieve in reduction of crime. A large part of that is using technology to supplement personnel," he added.

In its report, the ACLU questions the cameras' efficacy. "While the City asserts that its cameras have led to 4,500 arrests in the last 4 years," reads the report, "that is less than 1 percent of all the arrests during that time."